Dormouse and I went to Kauai for our 1st wedding anniversary, this past October.  I thought I would share with you our experience so that you can pick the information you might need to plan a future trip to Hawaii’s Garden Island.  Dormouse and I had 10 days to see the island , but this blog post is primarily about our arrival to the island and our 4 day backpacking trip on the Kalalau Trail.

Before departing we packed everything to be brought as carry on.  We didn’t want to have our tent and important equipment lost.   Backpacks (Z55 and Golite Quest) were slightly unpacked to meet the carry on restrictions of the airlines with the remaining belongings going into our “personal items.”  We packed clothes, a couple days’ worth of food, travel snorkeling fins, mask/snorkel, sleeping bags/pads, cameras, steripen, bleach for backup, and our trusty Big Agnes Copper Spur UL 2 tent.  Our clothes which we over-packed included fleeces, and puffy jacket.  We packed for the lowest temperatures of the year without really knowing when that typically happens.  We could have made due with just a rain jacket, long underwear, and fleece for emergencies even at higher elevations.

Dormouse and I flew in direct from San Francisco to Lihue (LIH), Kauai’s main airport.  From the airport we walked next to a busy Ahukini Rd on a large grass shoulder to a shockingly close Walmart (1.5 miles) to pick up more food, supplies, canister fuel, and odds and ends.  From the Walmart we caught the next bus to Kapaa to go to Honu’ea Internacional Hostel, our accommodations for the night.  The price was right for the hostel and would recommend it because there are no expensive resort fees tacked on top of the price like the cheap hotels on the island.  The hostel was clean and had everything you should expect from a hostel.  Including a locker to store your extra stuff for $20 a week (which is what we should have put our warm clothes). 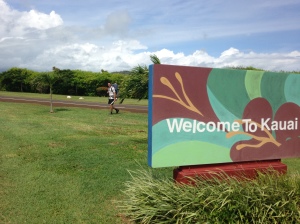 Walking from the airport in Lihue to Walmart is a breeze at 1.5 miles one way.

While we were at the hostel we met many, great people including Jeremy, a surfer from LA who was island hopping, catching waves for a couple weeks.  We told him that Kauai was known for the hiking and were surprised when he hadn’t been out on a trail, yet.  It didn’t take much convincing to get him to join us for the first few miles of the Kalalau Trail to the amazing Hanakapi’ai Falls 4 miles in.  Luckily Jeremy had a car and an awesome attitude for the hike.  He only had some very sturdy flip flops but he seemed in shape and it was only 4 miles.

The first two miles were pretty easy with great views and with dry tread. At two miles you reach a great beach. 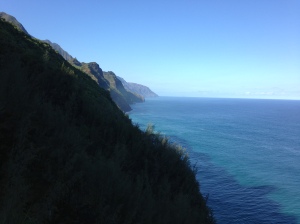 One of the views on the way to Hanakapi’ai

At the beach, there are small lava tube caves and a nice place to sit for a snack in the shade.  There were some bushes for stashing our fully loaded backpacks for the 2 mile out and back journey (4 miles total) to the waterfall.

The valley trail walked among many fruiting guava trees that we were happy to gorge ourselves on. Some guava tasted like bananas some more tart. 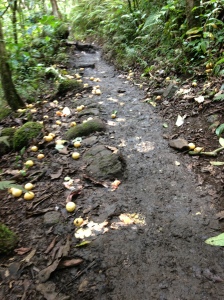 A guava lined trail on the way to Hanakapi’ai Falls. Yummy. FYI Don’t eat them off the ground.

After we reached the falls we took no time at all to swim in the enormous pool at the base of the amazing falls.  This place is as close to paradise that I have been. A refreshing dip after a muddy and humid hike in. We played in delight swimming in the torrent falling from 100′ up.  It was surprising to see how few people went in but instead sat confused in the cold waterfall mist. 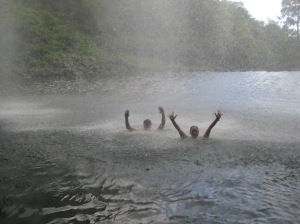 Swimming in and out of the waterfall was amazing. Don’t miss out if you make it that far.

We headed back to the beach to continue on the Kalalau Trail and parted ways with our new friend Jeremy. Going past the beach required a $20 permit/person. Going up the hillside and to the first bend we were greeted with our first amazing view of the Napali Coast. We were amazed that we were going to live among this beauty for 4 nights.

The valley after Hanakapi’ai

As you go along, the valleys get more and more breathtaking. The hiking was challenging for our legs which have become accustomed to CA trails. Many, many up and downs were a part of the terrain due to the steep cliffs that we were hiking on. The terrain and swimming from earlier caught up with us. We decided to camp in one of the larger valleys on the trail. We had to retreat quickly to our tent to avoid the mosquitoes.  Like much of Hawaii, below 3,000 feet is overrun with mosquitoes in wet areas, among other non-native species.  One of Kauai’s remote areas was no exception unfortunately.

The next morning we quickly broke down camp to avoid the swarm of mosquitoes.  We made our way to Hanakoa Valley.  At that valley our map and books we had read suggested that there was a trail to a waterfall.  We had decided to try to reach this waterfall, which was only a mile in.  Seemed like a great idea.  We quickly found that the trail was non-existent and decided to turn back.  We weren’t positive that it would be running because of the recent dry weather, so the additional effort didn’t seem worth it.

Heading on we reached the dreaded 7th mile of the trail.  This is where people with acrophobia get their ultimate test.  In this area, the trail is next to a cliff with a narrow tread-way while heading downhill.  There was some great timing also.  We got to this section in time for the parade of helicopters to watch us walk along this precarious section of trail.  At any other point on the trip I felt smug about how great it was that I was in paradise while the people in the helicopter were wishing they were in our shoes.  It’s astonishing that trail is actually there because of how steep the area is.  At this point we were glad we brought our umbrellas to block out the sun.  The shade as you go towards Kalalau Beach becomes more and more rare.  The Kauai heat, even in October was warmer than my San Francisco thinned blood could handle.

The seventh mile of the Kalalau Trail

The 7th mile of the Kalalau Trail

After the scary part of the trail you pass through even more amazing landscape until you make it to Red Hill.  At Red Hill you get your first good view of the Kalalau Valley. 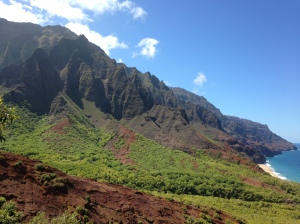 Going down into Kalalau Valley is a memorable experience because of the stunning scenery. My experience in particular was memorable for a different reason.  After ducking down into the trees and crossing Kalalau Creek I was greeted by a couple “locals,” people who have taken up residence in the valley who mostly are not native Hawaiians.

A man and a woman were shocked to have encountered me at that moment.  The man quickly asked without introduction, “Are you a vegetarian?”  Confused, I answered, no.  He walks past and says, “Okay, good,” dragging a freshly gutted goat.  The woman smiling widely said, “Welcome home!”

If you are used to backpacking into the wilderness you might be disappointed with the experience of coming into the Valley or camping on Kalalau Beach.  But the way I saw it, going to this destination was akin to coming into a town which had no supplies.  Walking through the camps, we were greeted over and over with the same exclamation, “Welcome home.”

As you walk down the beach you pass a privy and there are plenty of spots to camp.  We decided to go further.  If you go to where the trail ends you find the community shower/water source complete with place to put a bar of soap.  Luckily there is no reason to take water from downstream because the stream meets the beach quickly after the area.

We decided to set up camp further away under a palm tree.  And there we spent two nights.

We lived beneath the palm tree in this picture

While there we learned of trees bearing tangerine-like fruit.  Unfortunately, we didn’t have a knife for their thick skin.  Further down the beach there are some caves on the beach worth exploring.  We were told that in the summer when waves are calm on the north side there is a great beach you can swim to if you can swim around some rocks at the west end of Kalalau Beach.  If you aren’t a strong swimmer some fins would help greatly.

Up Kalalau Stream there is a great deal to explore.  We decided to make the small trek up to the Seven Sacred Pools.  It is a great place for a refreshing dip when the surf is rough.  Be careful to closely track your path because there is an extensive network of paths through the valley due to the local population.  We ran into a “local” who was headed out of the valley.  We were lucky to have them guide us out.  She took us via the “Hippy Highway” instead of the Kalalau Valley Trail that is listed in maps and guide books.  She told us that the area had been cleared out of many of the “locals” recently within the past month (these maneuvers apparently happen only every couple years, so the limited number of “locals” we met might be very different from what others may experience.)

Overall our time at Kalalau Beach was relaxing and we watched a couple of beautiful sunsets while making dinner, and attempted to eat as many of the fruit from the local plants on the beach as possible.

After our second night we reluctantly left.  We headed back to Hanakapi’ai Beach to spend the night after going to the falls again.

The next morning we hitchhiked to the closest bus stop in Princeville.  From there we caught a bus to Lihue for our next abode.

Stats:
– $20 per person/day (a deal for paradise).  You will have a hard time getting a better deal on Kauai
– 11 miles one way with 4 mile side trip to Hanakapi’ai Falls
– Bus trips on the island $2 per leg
-Pack beach clothes and little else for just Kalalau.  Store your warm clothes at a hostel
– Walking in sandals is a great idea given the moist tropical conditions.  Keep your feet dry.  Dirt Stew had a couple of rotten spots on his feet after it rain and he had to deal with wearing his wet shoes that never dried.
– An umbrella is a great comfort in the exposed sections and the area gets a lot of rain.