From Kaimai Mamaku, we got a ride to Hamilton. After a night in Hamilton, I was feeling quite a bit better and we figured out that our friend Martin was only one day ahead of us on the Te Araroa trail (the trail goes through Hamilton). We made a plan to hitchhike slightly north of Hamilton to hike with Martin on the Te Araroa for a few days before our volunteer stint with the Department of Conservation.

We got to the town of Ngaruawahia by getting picked up by a taxi (no joke) who decided to take us there free of charge. I have no idea why.

There we met Martin and started hiking up into the bush on a huge staircase which was absolutely jam packed with people trying to get a work out. There were almost more people here than on the Tongariro Crossing, but then again, it was a public holiday, so everyone was off work. 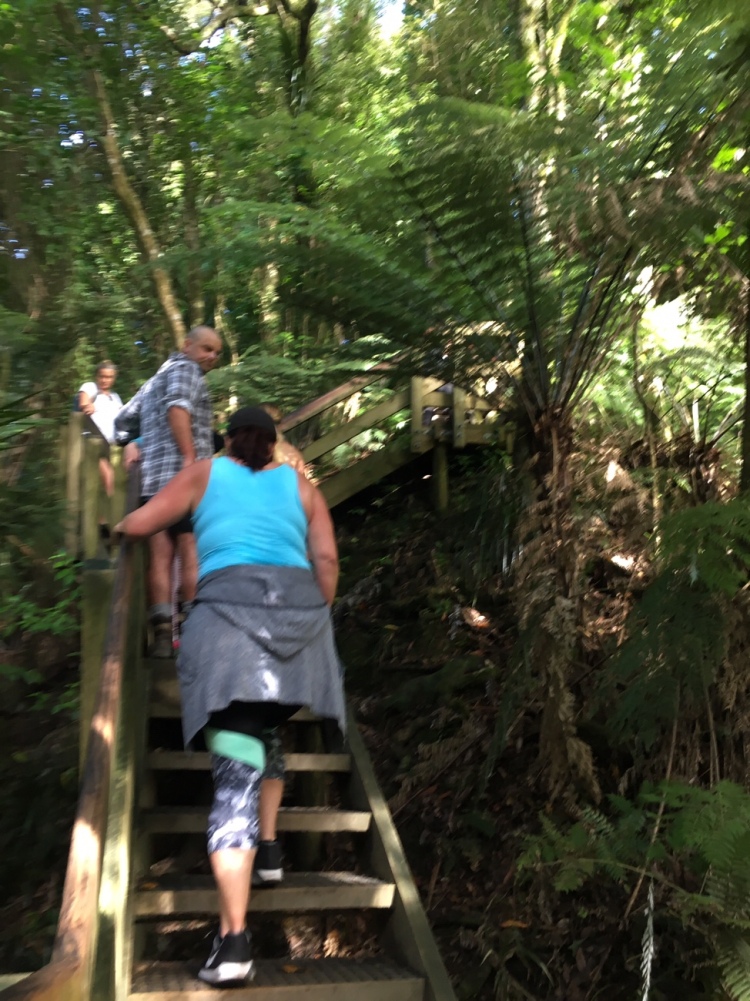 The stair case went up about 400 meters or so to the summit where there was s lookout tower with nice views. From here, all of the exercisers headed back down the staircase the way they came while we headed down an overgrown hidden trail along the ridge. We left the crowds behind in a heart beat. The trail was overgrown, muddy and dense, but we pushed through, slipping and falling until we got to a section with a really big Kauri Tree. 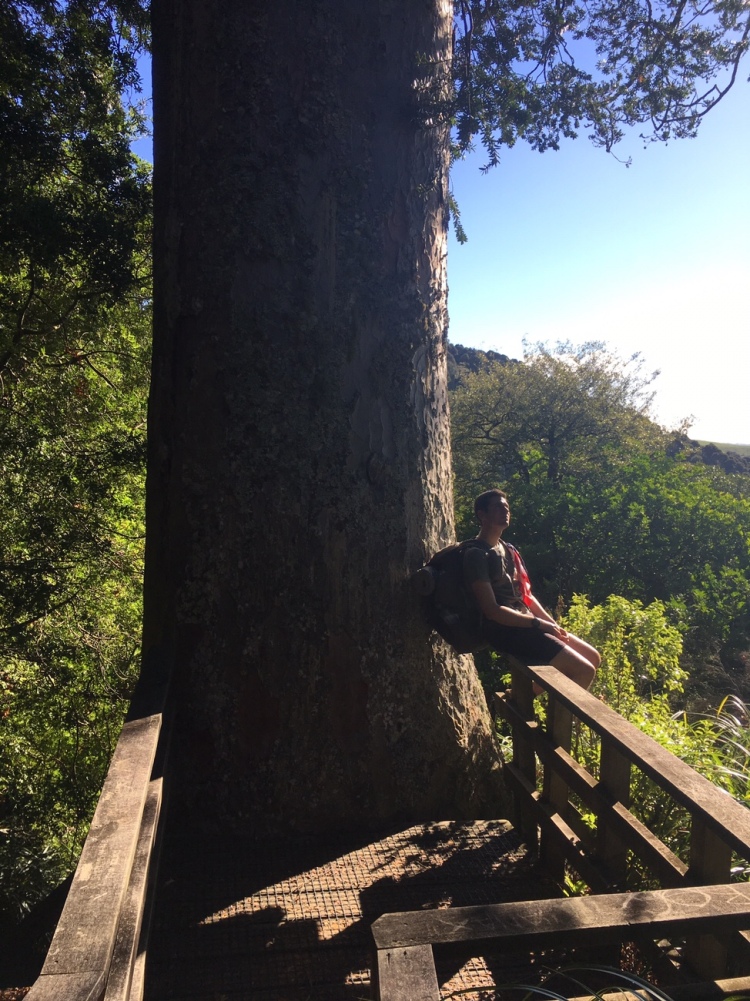 Kauri trees are the largest trees in New Zealand, and they are currently being threatened by something called Kauri die-back. They’re not entirely sure what causes Kauri die-back, but they believe that people bring a disease in on their shoes and spread it to the roots of trees. For this reason, some of the biggest trees are surrounded by board walks, and when you enter or exit an area with Kauri trees, you have to go through a station where you throughly clean your shoes. 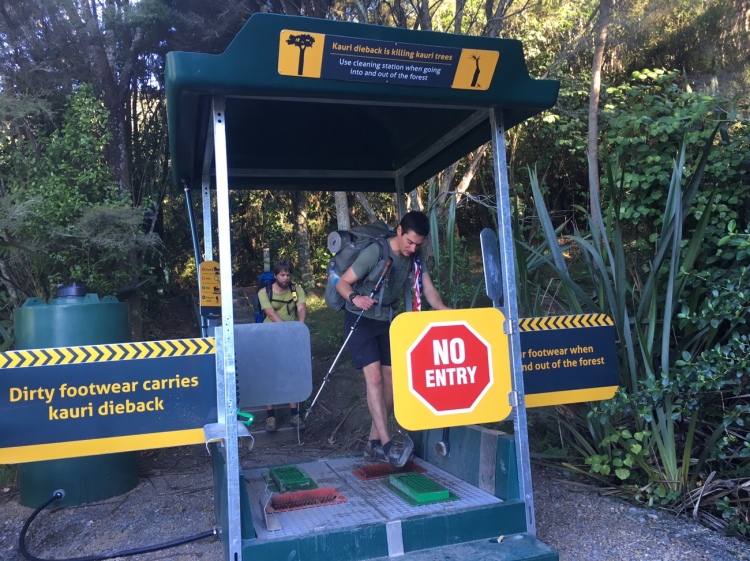 At the end of the track we cleaned our shoes and met a man and his wife who started talking to us and wound up giving us each a huge bag of fijoas – a fruit which was currently in season, and many people in New Zealand have fijoa trees. They taste slightly similar to kiwis only (in my opinion) slightly more bitter and slightly more disgusting. 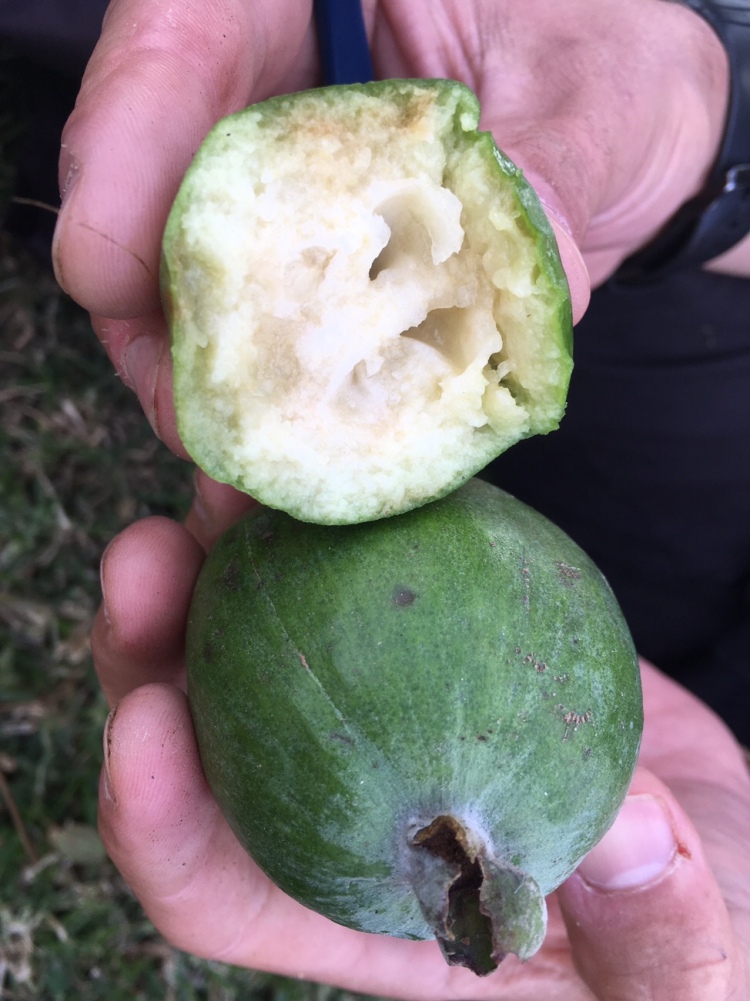 From there we walked to Huntly, a town where we had booked a very cheap Airbnb, which was great.

The next morning we decided to hitchhike to get closer to the Hunua ranges, but wound up road-walking quite a way to get there. After 20km or so of walking on various roads, we finally got the the track that we wanted to hike on only to find it was closed. Needless to say, we were quite disappointed. After we looked online, we found it it was probably due to storm damage. 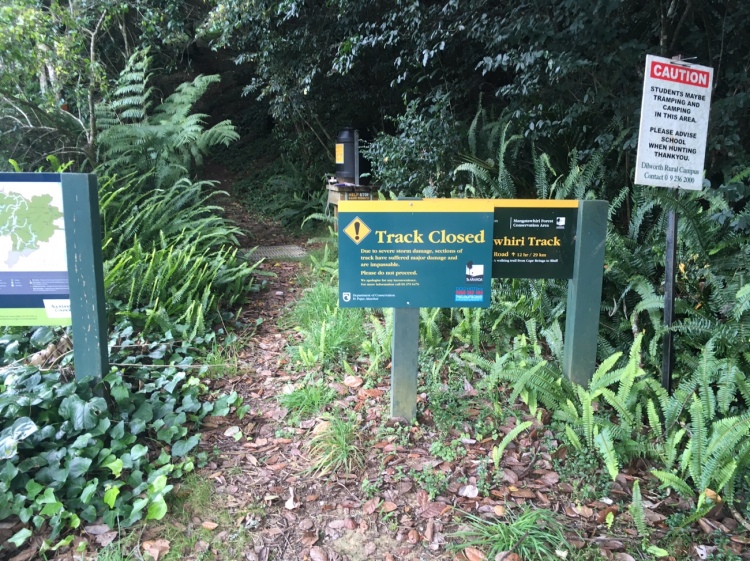 We were in the middle of nowhere, but a car with a lady in it pulled up and gave us a ride back out to Route 1 where we tried to make an alternative plan. We decided that we would walk to the nearest small town where there was a place we could camp for free, and we would make a new plan in the morning. 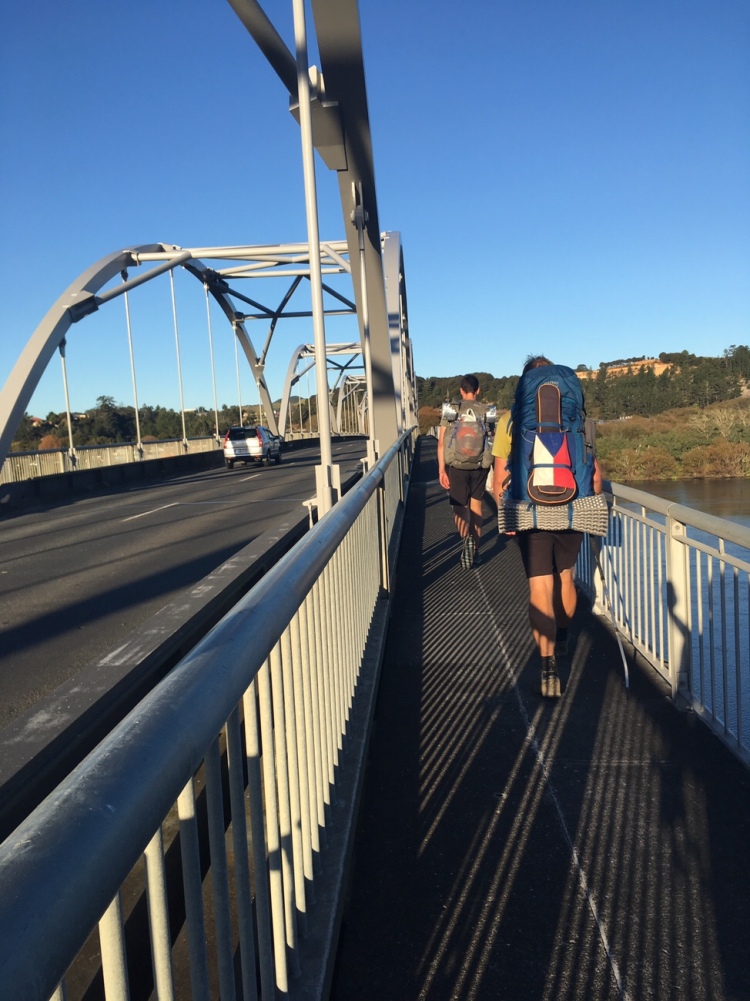 The next morning we decided we would try to hit the Hunua Ranges from the other direction by hitchhiking around. This took some time, but we got there and were able to hike a short distance in the bush to make it to Hunua Falls. 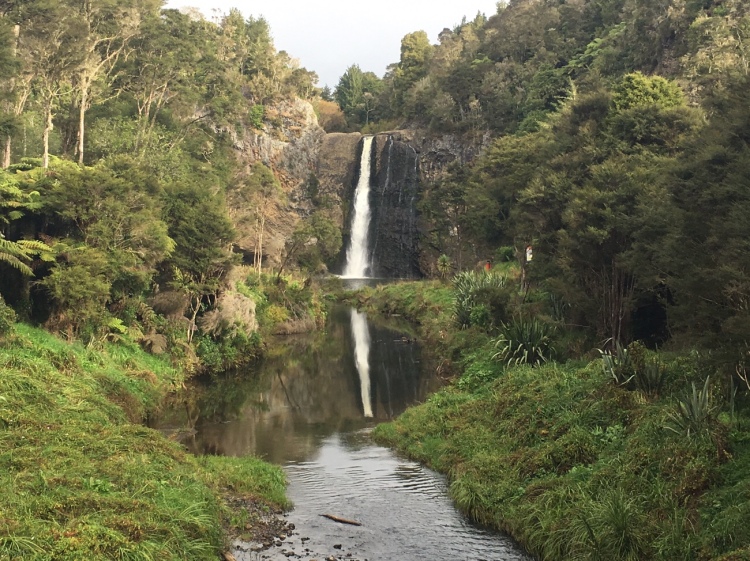 Here we figured we would camp, but someone from a summer camp right next door told us that the rangers didn’t like people camping there, but we could camp inside the summer camp since nobody would be there over the weekend. In return, we only had to bring the trash cans back behind the gate in the morning. It was a deal.

There was cell phone reception at the camp, and overnight we read the weather forecast and found out that a big storm was headed our way. They predicted 60 to 100 mm of rain with winds up to 120km/hr. There was no way I wanted to be outside for that. John and I decided that we would simply head for Auckland since that is where we needed to be in another day or two anyways for our vonunteer gig, while Martin decided to walk to a farm which had a Czech pig roast party planned for the weekend.

We parted ways and before we knew it a car picked us up, and the gentleman was actually headed to Auckland with his wife that day, and agreed to take us in.

The storm was disappointing. I’m not sure how much it rained, but it couldn’t have been as much as they predicted, and it seemed like the wind really wasn’t that bad. We were kind of bummed to be stuck in Auckland instead of eating pig with Martin at the random Czech party on a farm near Hunua Falls.

Even so, it was good to get ready for our volunteer stint which we are very excited about. We will spend 5 days on a predator free island with rare and endangered birds including kiwis while helping with small projects around the island. Stay tuned!

2 thoughts on “Hamilton to Hunua Ranges”