We attempted to get an early start just in case we had the energy to complete two stages. The GR20 is broken down into stages, of which there are 16 according to our guide book. Some stages are much longer than others and each stage ends with a refuge where you can spend the night. You’re technically not allowed to spend the night camping along the route – just next to the refuges where you usually have to pay to do so. During peak season you can also get meals and supplies in these huts, but none of that will be available for us since the peak season ended at the end of September. We now have 12 days on the island before we leave, so we will be doubling several stages, plus we need some extra time in case of bad weather – we have been warned that 3 days from now looks like a lot of rain. 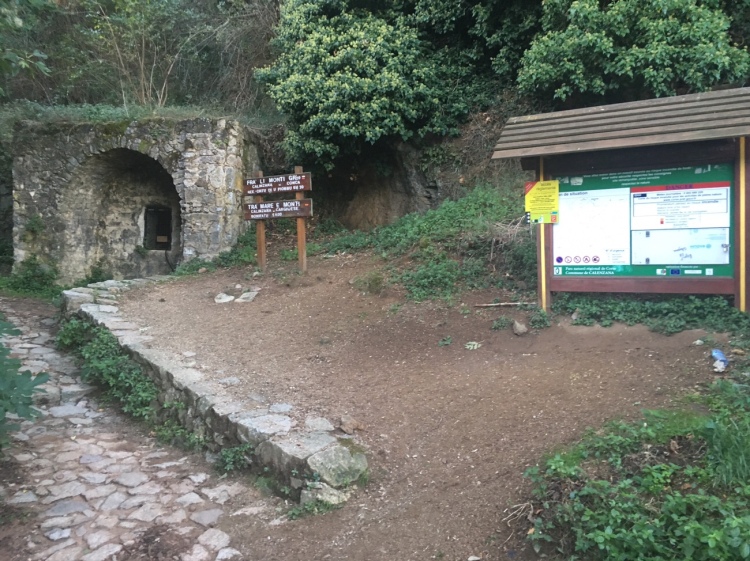 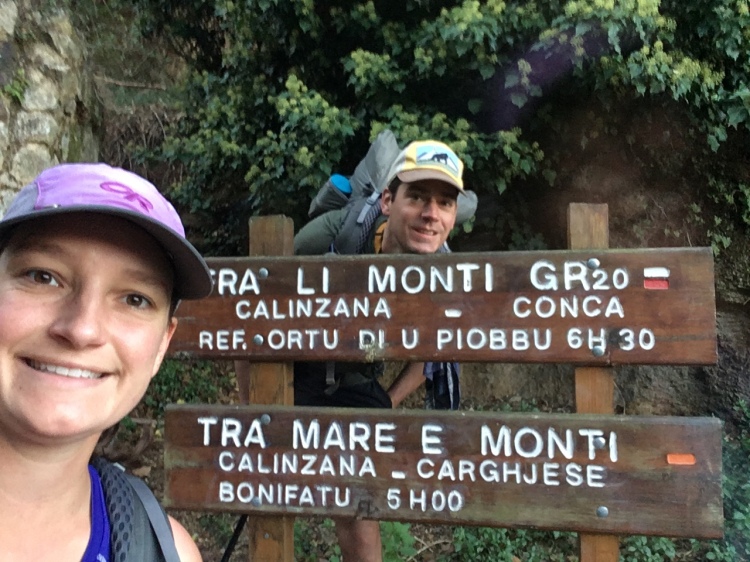 We managed to start hiking by 7:30AM, and slowly made our way up the path marked with white and red blazes indicating the GR20. I knew we had to climb a ridiculous 5000+ feet before the first refuge. I was surprised when the trail was actually not that hard – a steady uphill climb, but well graded. For the hardest “GR” trail, I suspected this wouldn’t last long. We were, however, carrying too much water and too much food as we kept crossing water sources when we thought there wouldn’t be any. Oh well. The guide book was obviously conservative on water sources. 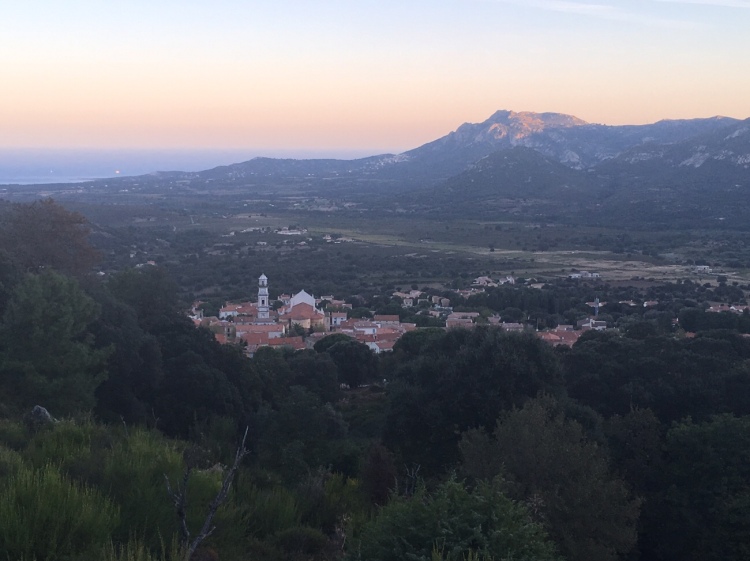 We climbed and climbed, and it actually took quite a while before we hit the first section with any rock scrambling, but I was enjoying it so far. 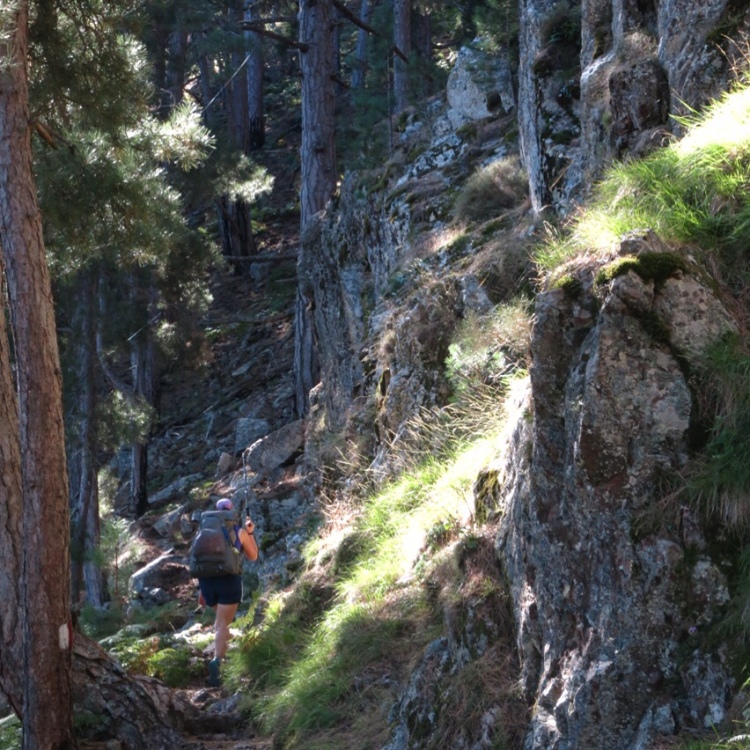 We reached the first refuge before 1pm, so it took us quite a bit less time than our guide book advertised, so we felt confident that we could make the next section before sunset.

At this point we had passed only one person, a German girl. There were a few French men hanging out at the refuges and they were too busy joking around with each other to make much conversation with us, so we simply made it a quick stop.

We carried on and soon heard the sound of cow bells in the valley. I couldn’t imagine a cow in this environment, and moments later my thoughts were proved right when I heard a bleat and saw a goat running up the hill followed by several others. They were using the trail too, but were happy to climb a sheer cliff to let us pass.

We climbed up to a ridge with an amazing view of the mountains we were about to enter. These are some of the most rugged, pointy mountains I’ve seen. I couldn’t imagine how someone had the idea to build a trail through here. 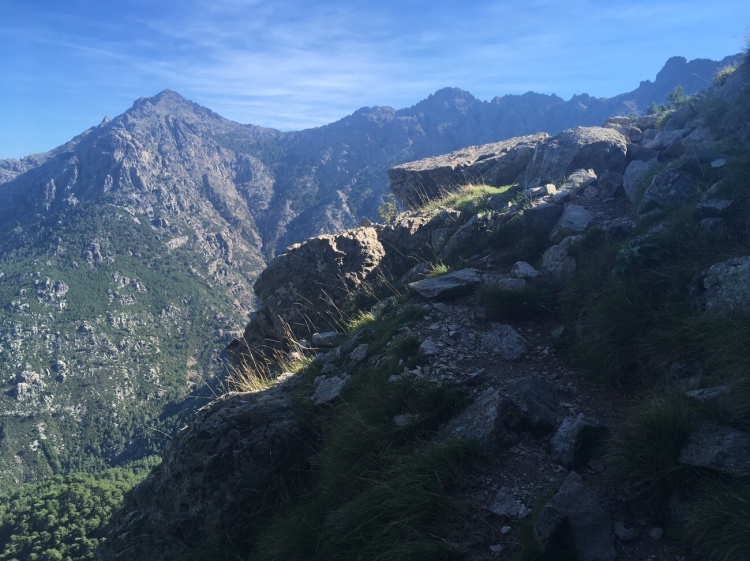 In fact the trail was not at all obvious to follow and often curved back on itself to avoid treacherous rocks. 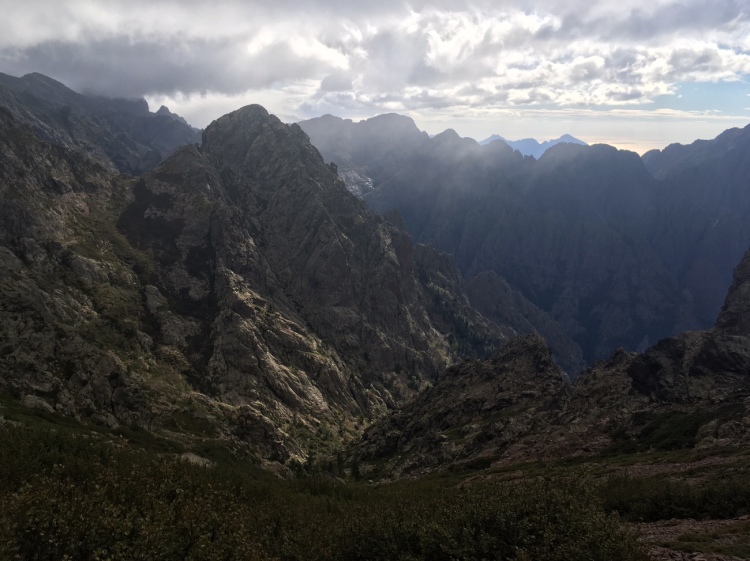 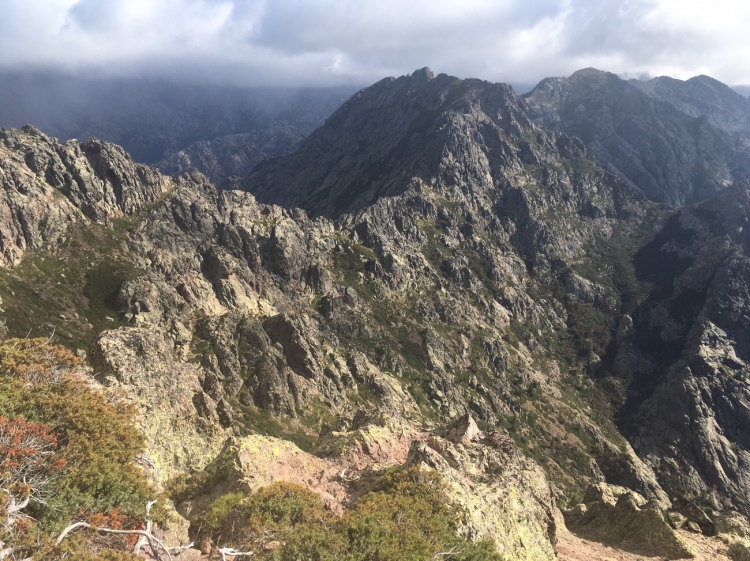 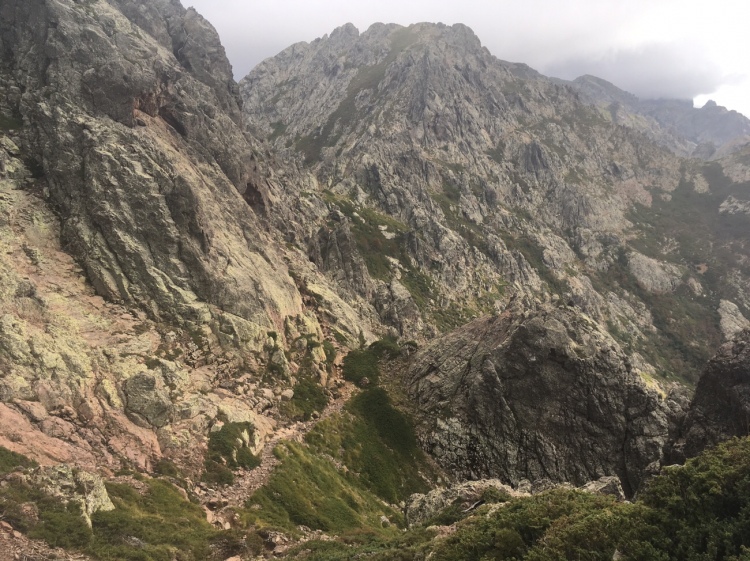 The scrambling got harder, and in several places it was best not to look down but rather concentrate on the necessary moves, which sometimes got elaborate especially with our bulky packs. We were soon exhausted, and wondered how far we had come. Clouds started to roll in making it seem later in the day than it was, and I started to panic a little not knowing if we would make it down off these exposed ridges before sundown. I was surprised when we passed two French girls going extremely slowly. I asked them when they left the refuge, and they told me 8AM this morning. I was totally confused. 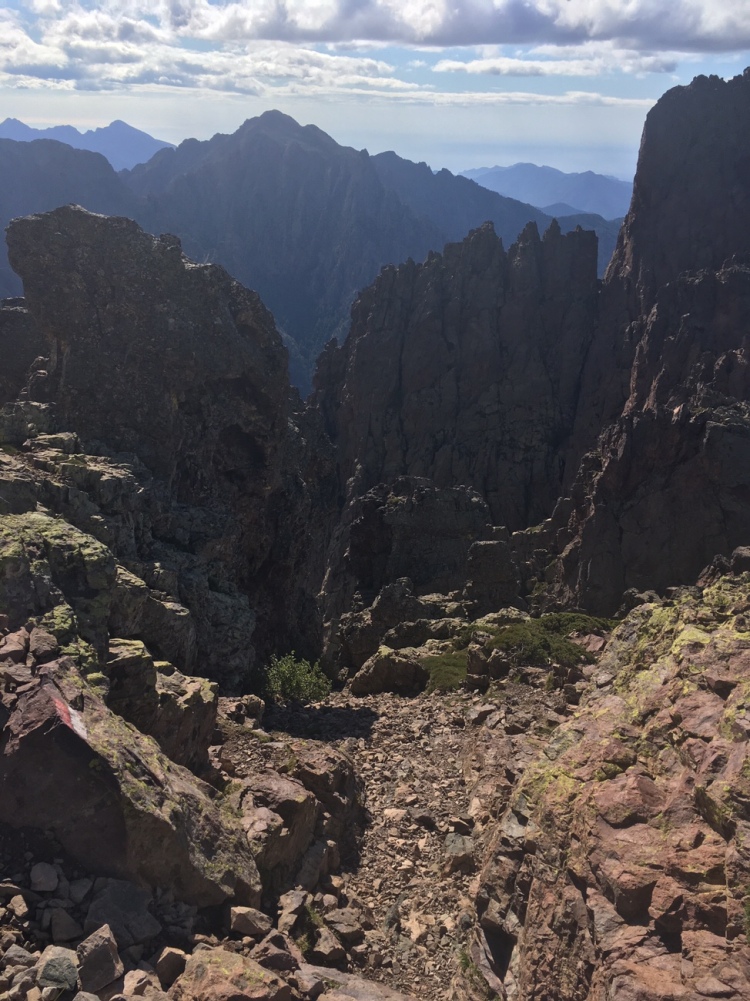 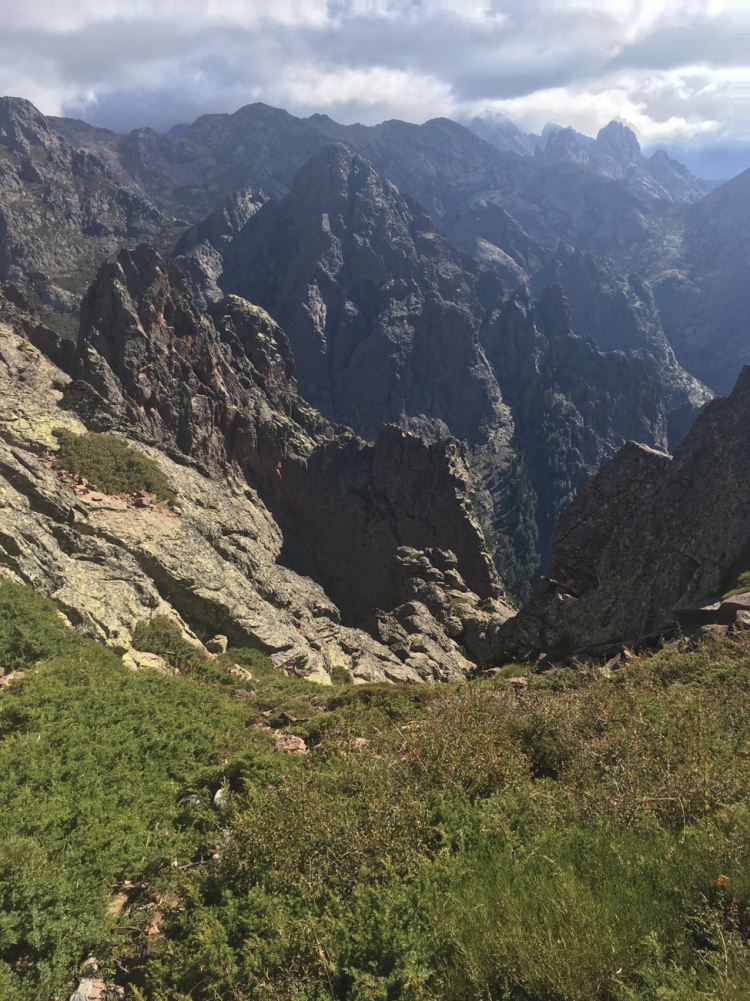 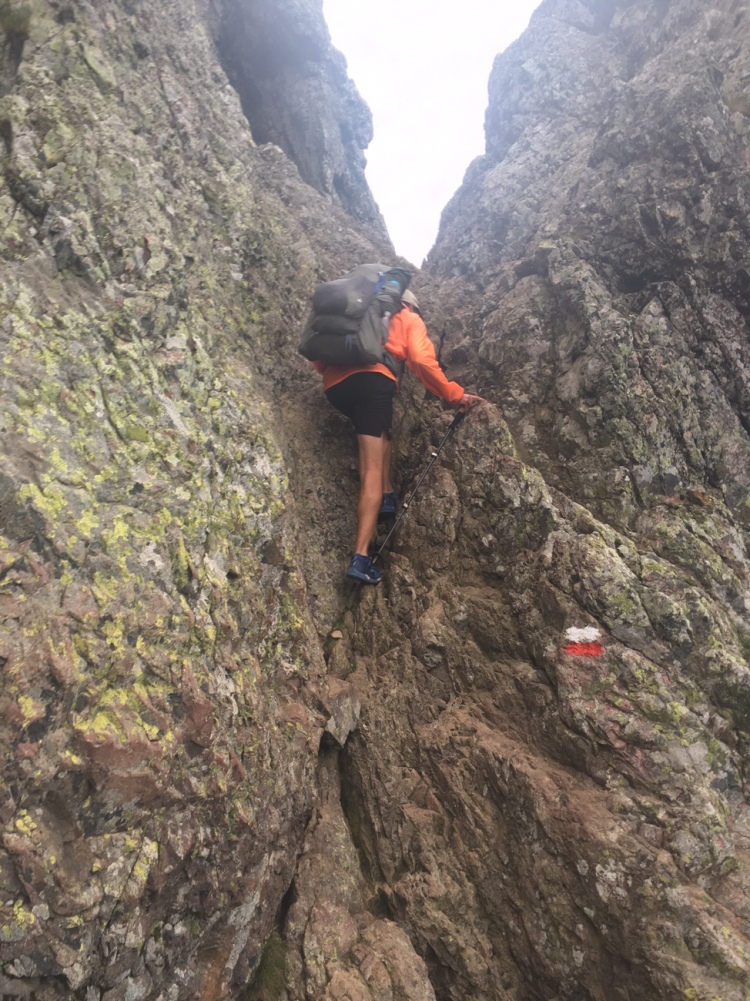 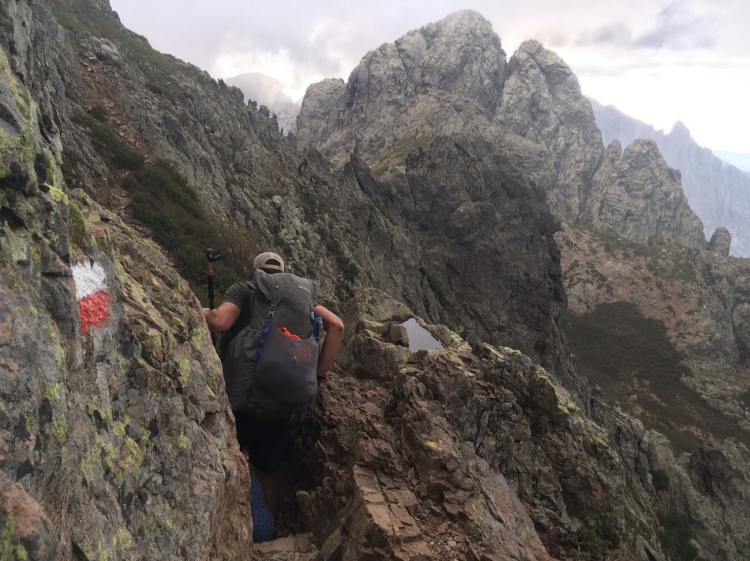 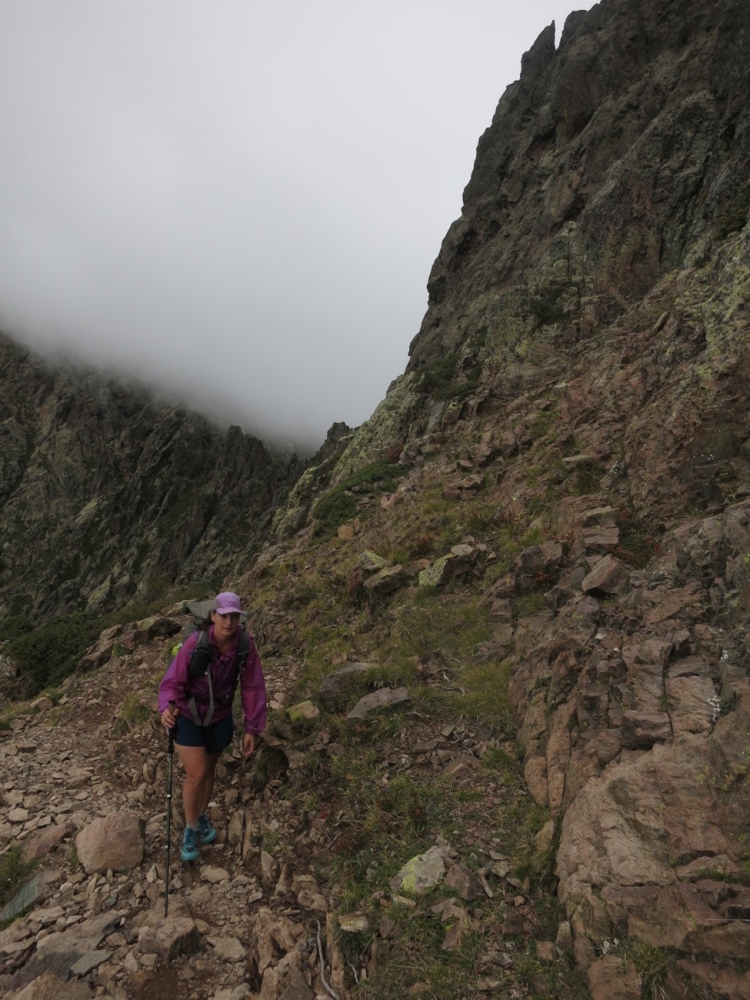 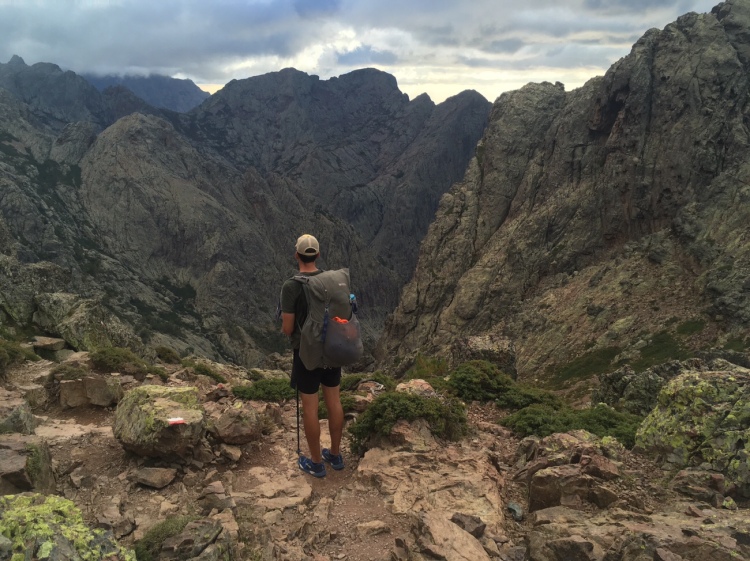 Luckily we soon passed a sign indicating where we were, and I could look at the guide book, and indeed we had only two more hours of hiking left. Phew. By this point though, our legs felt like mashed potatoes. The views continued to be awe inspiring. 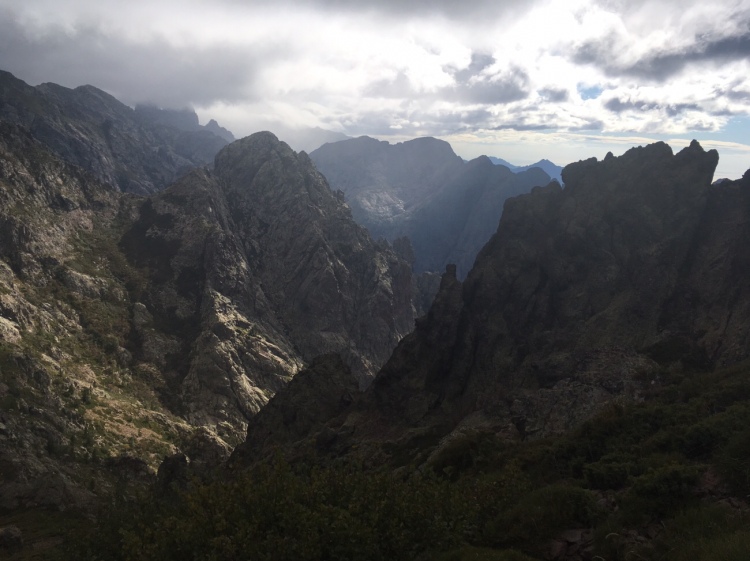 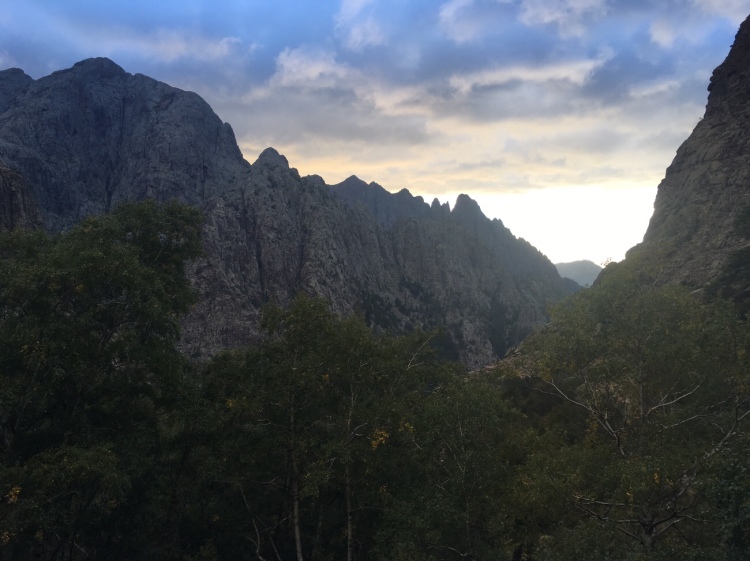 Finally we saw the refuge down a valley and started the decent towards it. It felt like the distant buildings were not getting closer as time passed, but I knew my mind was playing tricks on me.

We made it, and found the buildings surrounded by many tents. We wandered inside to see what there was to see, and the whole hut was full of loud French people eating and taking up every available seat. one or two people said hello, but otherwise nobody asked us any questions. So, we walked out and found a place to pitch our tent. We made dinner and got into bed and wondered where the two French women were behind us. The sun had already set (it gets dark around 7pm at the moment), but at 8pm we heard voices and saw headlamps coming down towards us. It was them. I can’t imagine doing any of this trail in the dark – I hope that won’t be us in days to come!

We slept quite poorly given that we were on a tiny sloppy campsite, but when some loud French voices passed by our tent before 7am, we knew we weren’t going to get any more sleep.

We started our day by crossing a river on the scariest swinging bridge I’ve ever been on. This is saying something seeing as earlier this year we walked the length of New Zealand. The guide book referred to it at “a very wobbly bridge”, but I would describe it as walking on grated metal steps (see-through) with way too much space between them with a long long way down if you were to fall. The river below was more of a gorge, and we were dangling way above it- much too high for comfort. The sad thing was that because you could almost fall through the gap between each step, you were forced to look down at your feet and try not to concentrate on what was below. 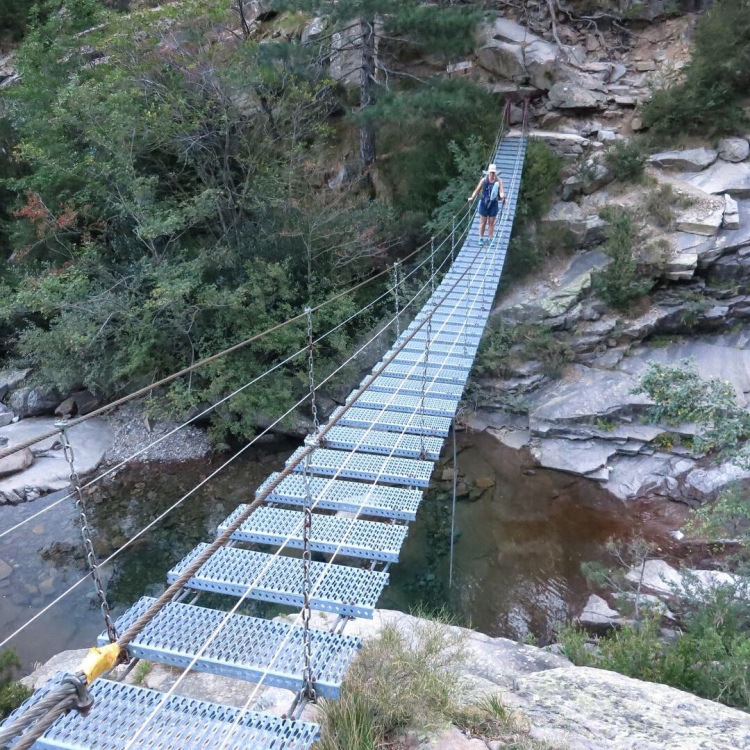 Once across, the trail climbed up several thousand feet through steep rocks. I knew when we started the day that this measly 3.75 mile section was going to be difficult, because according to our guide book, it was meant to take 5 and a half hours and climb up 2280 ft as well as down 2330ft. 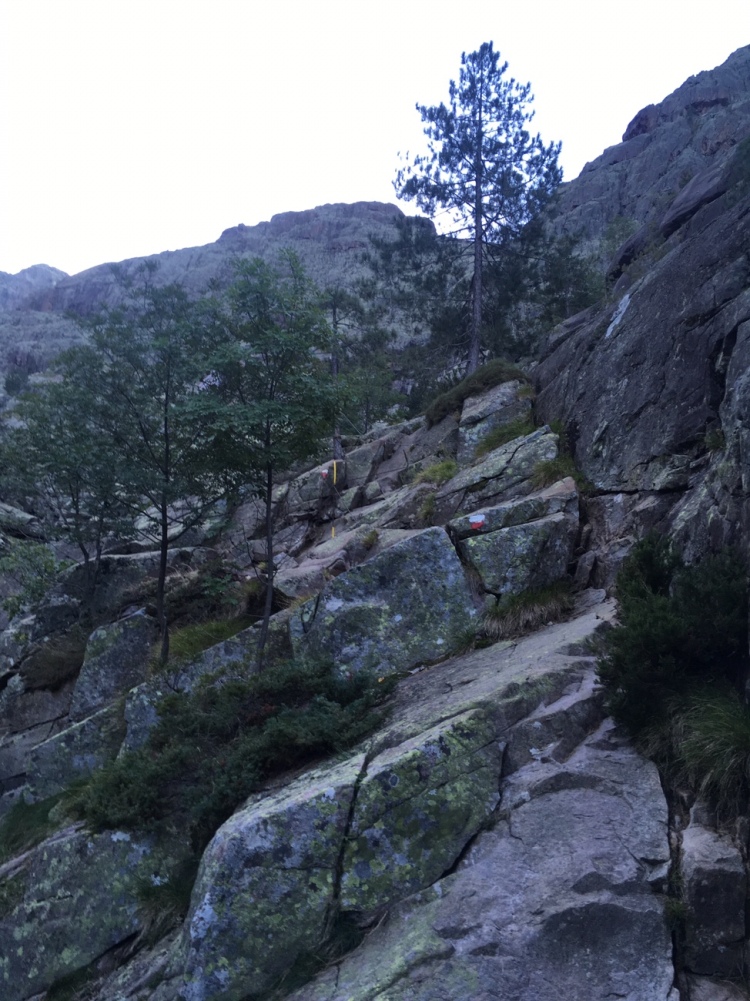 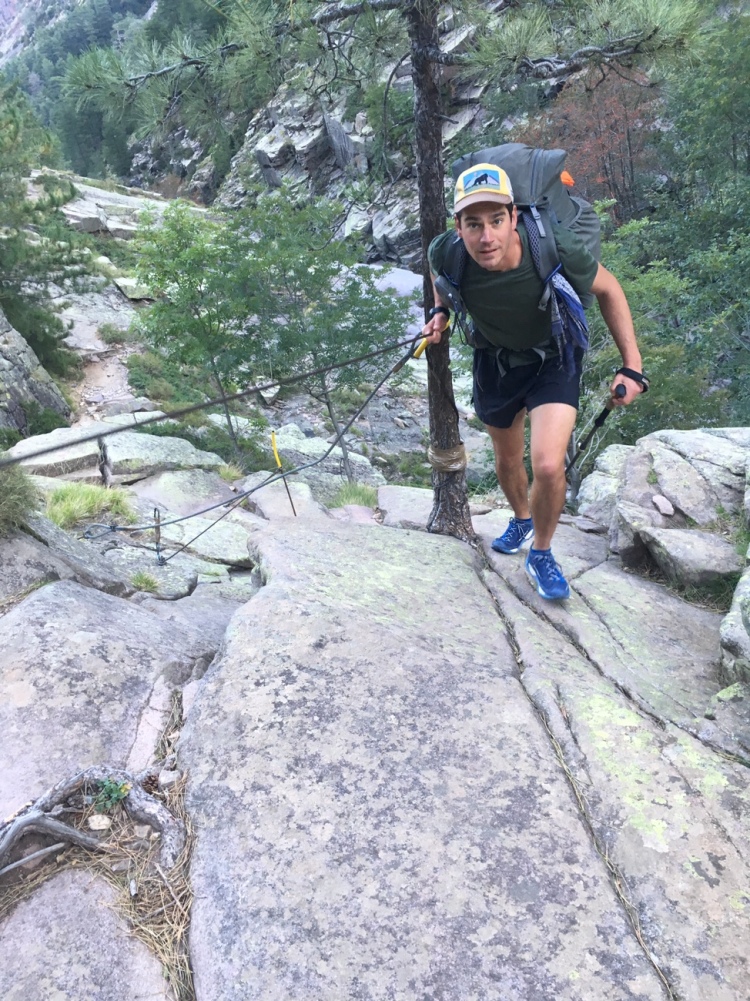 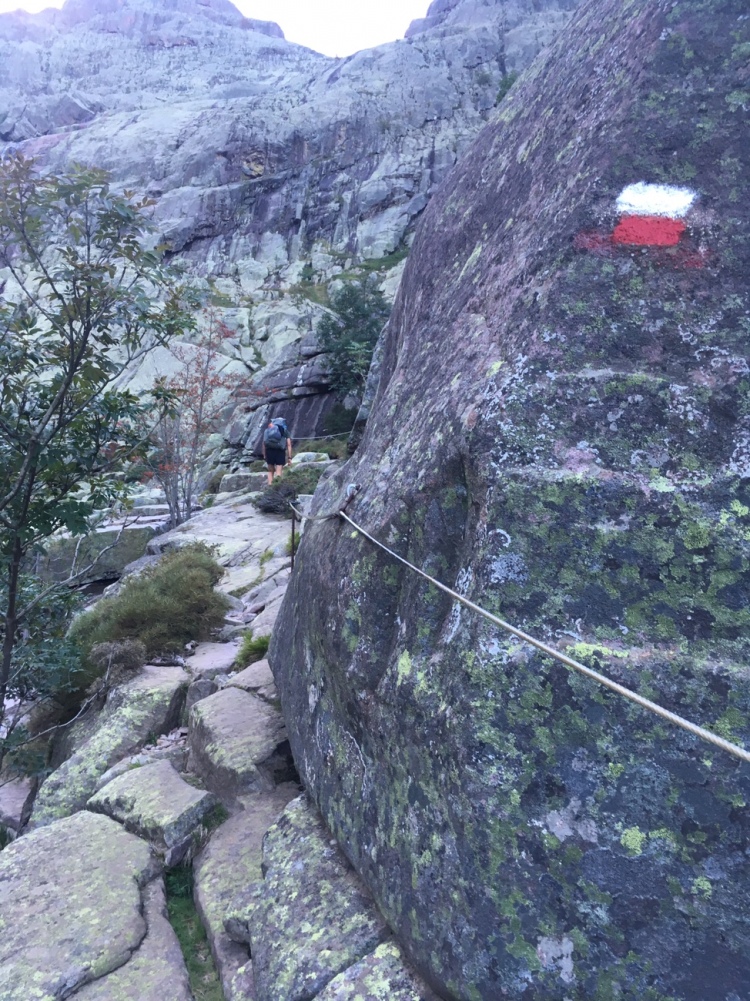 My legs were so tired from the day before that each step took considerably more effort than it should have. There were tilted slabs of rock to walk across were falling would have been dangerous, but often there were metal cables to hold on to. Luckily we had a clear morning, and we didn’t have to contend with wet rocks.

When we reached the top we had lovely views and we stopped for a break. Heading down, the rock scrambles were more technical than the day before and I often had to take off my pack in order to find a way down. My knees weren’t happy about losing 1500ft in a matter of a 1km either. There really aren’t too many ways that a trail can go down that steeply, and as you can imagine, we spent quite a lot of time sliding down steep rocks on our butts. 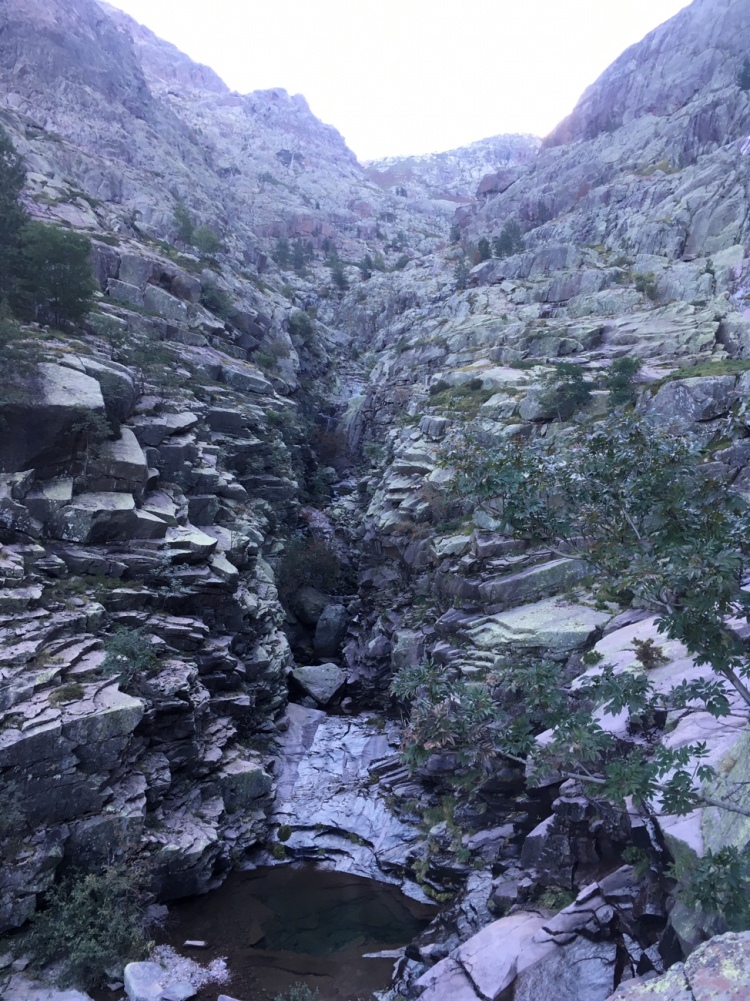 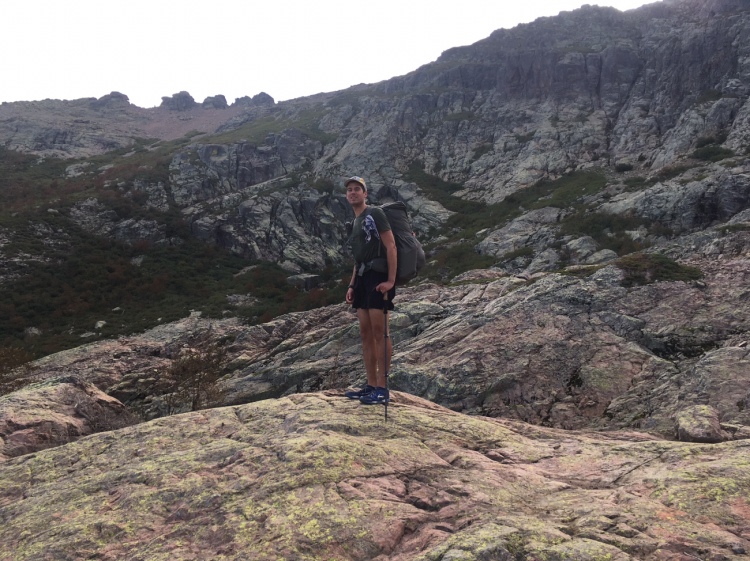 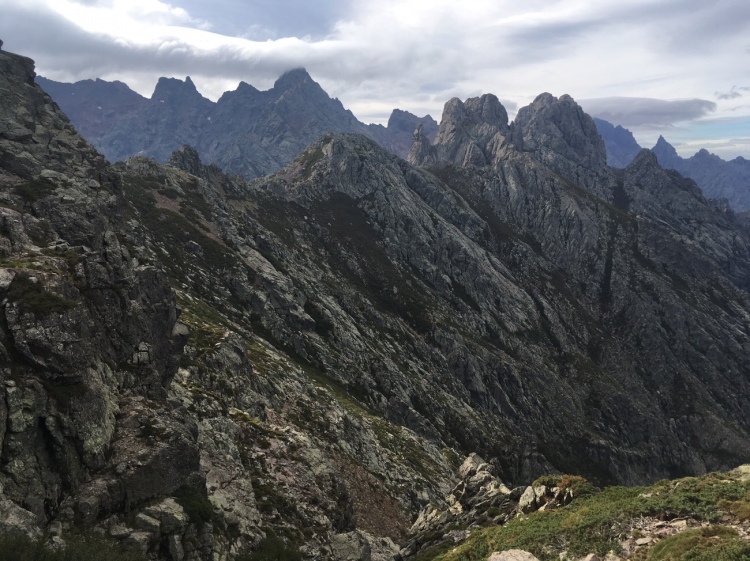 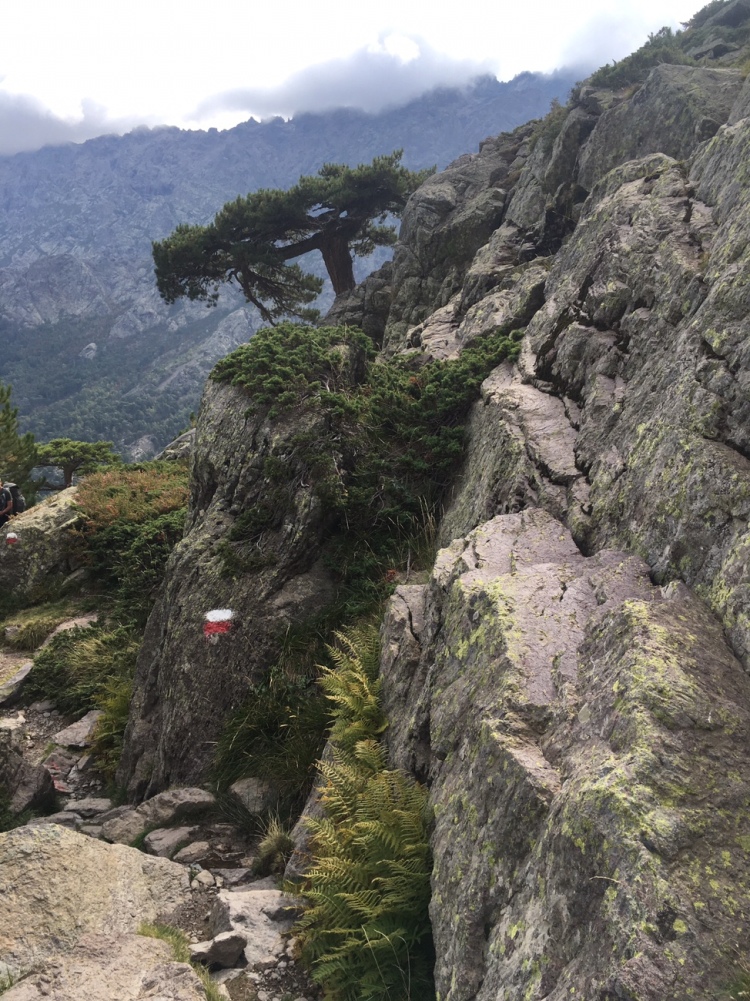 It took over an hour to go down that last kilometer, but once we reached Ascu, it was only just after noon, and I knew that we couldn’t really plan to go any further since the next section was supposed to be 8-9 hours long (and as I mentioned earlier, you can’t camp between sections). Ascu is a ski station with a ski lodge (closed), and a restaurant (open). After a short rest, we wandered over to the restaurant and ate a somewhat expensive but much appreciated meal. John got a burger and was surprised to find an enormous piece of smelly Corsican cheese was part of the sandwich. We also figured out that we actually had to pay to camp here, and that there were also lukewarm showers available.

We also befriended a group from the UK who were headed in the opposite direction and they had managed to get a weather forecast that we copied down from them. One young Brit bragged about how fast they were hiking, he seemed to have conveniently remembered everything incorrectly in terms of time, claiming the last section took them only 5 hours when an older (and obviously more experienced) man in their group admitted that it had actually taken them 7 hours. At this point in my hiking career I have absolutely nothing to prove to a bunch of young dudes on trail, and in my mind I was rolling my eyes at his arrogance. I congratulated them on their journey and hoped that would smooth their egos for a short while so we could talk about the weather – a topic I was actually interested in. 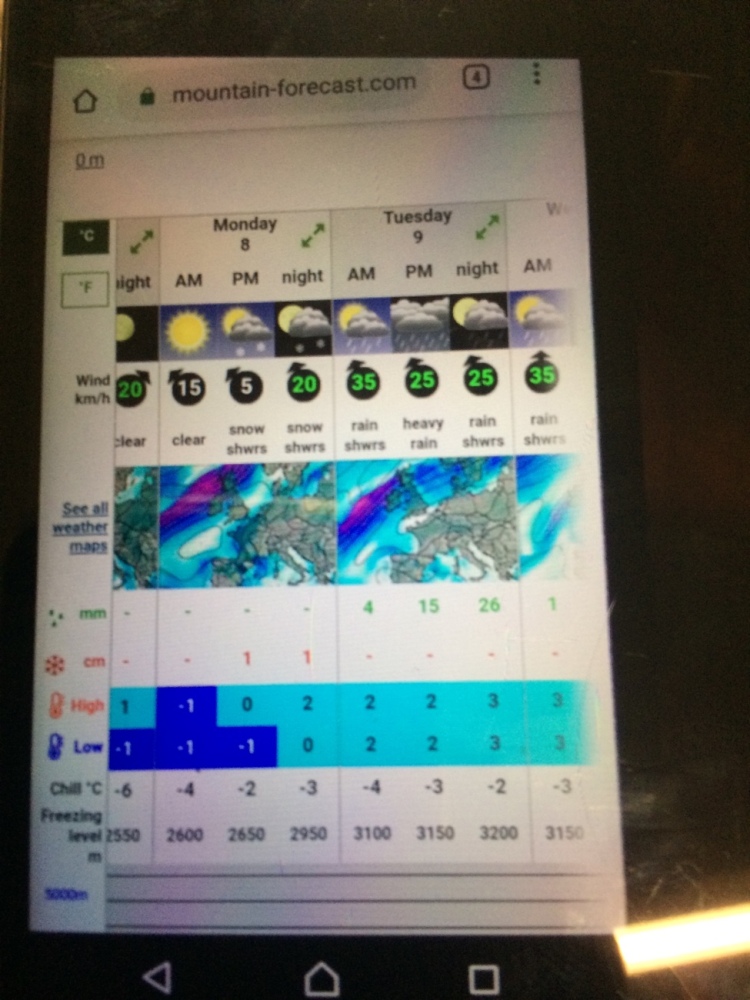 We retreated to our tent and planned to continue on tomorrow despite the weather. I wonder if this is a bad choice, but waiting could mean waiting forever. Hopefully the weather wont be quite as bad as predicted, but who knows.