During the last week in January, we took off to Costa Rica. We got a flight from Asheville to Ft Lauderdale, and then the next day took a flight to San Juan, Costa Rica.

Most of our time in Costa Rica will be spent volunteering at Finca Bellavista, an off the grid treehouse community in the middle of the south of Costa Rica.

We got off the plane and took a taxi to the bus station in San Jose. The taxi driver didn’t speak a ton of English, and so he used an app on his phone in order to communicate with us. Unfortunately, the program did not always translate his sentences very accurately. At one point he said “you’re going to bring blacks back home with you.” And he actually meant that we would be coming home tan. I had to laugh.

The bus station had a small place to buy food, and we pointed and used our limited Spanish to order some beans and rice with mystery meat. It tasted delicious.

The bus was air conditioned, and was supposed to have WiFi, but once we were on board, it was clear that the WiFi wasn’t working. Unfortunately, the plan had been to communicate with our friend, and volunteer coordinator, Eva, about our arrival time from the bus using the WiFi. What were we going to do now?

The bus ride was 6 hours long, and along the way, it stopped a few times at little roadside stations with food and bathrooms. I noticed that they also sold SIM cards, and I bought one hoping I could get my phone working. Once back on the bus, I struggled with the directions and tried dialing a few numbers, but my Spanish was not good enough to get the thing working.

At the next bus station, I noticed that there was another bus parked there too, and I ran up to it to see if that bus had WiFi, and it did. Crisis averted. I quickly let our host know that time we were planning on making it.

Eventually we made it to Piedras Blancas, where we got a ride to Finca Bellavista from Martin, a manager at the property. The drive up to the property from the main road requires four wheel drive, and climbs more than 1000ft over two miles on a rocky gravel road.

“I’m basically blind in one eye” Martin told us with a smile as the truck bounced up the road. John and I looked at each other and clenched the handles inside the vehicle. We arrived late, so we basically went to bed straight away.

In the morning, we saw our environment for the first time. A lovely community with a big kitchen and dinning area, and a communal hangout spot for yoga, lounging around and happy hour.

We had our first day off, so we spent the day exploring all the trails on the property. Only minutes into our hike, I almost stepped on a snake – it slithered right between my legs as I walked past, and I have no idea what kind it was since it moved so fast. I was thankful that I was wearing boots. We had been told to bring them for exactly that reason. We also visited a waterfall, and soaked our feet in the surprisingly warm river water.

Soon after, we also saw a poison dart frog. It was red with blue legs, but jumped away too quickly for me to get a picture.

As volunteers, we’re staying in a volunteer bunkhouse. It’s not fancy, but it’s not bad. We’ve got a toilet, a shower (cold water only), an area for drying clothes, and room with 6 bunks. There’s even a hammock, but the bugs are a little annoying on the deck.

We work 5 days a week, either morning or evening shift. Mornings involve helping prep breakfast, and then helping get trash and sheets out of any treehouses that are checking out that day. Evening shifts involve walking people who are checking in for the day out to their bunkhouse, and then helping with dinner. Sometimes there are no check-ins or check outs. Each shift is 7 hours long, but some of that time is spent eating, or just hanging out waiting for people to arrive or leave. It’s definitely not hard work.

Walking out to treehouses is fun, because some of them are quite a long hike out. The furthest one is maybe about a mile away, and the trail is quite steep and rocky, so it takes some effort to get out there. No vehicles are allowed. Guests have to think hard about what luggage to bring.

We can work extra hours on an approved project of our choice, and if you accumulate 6 extra hours, you can exchange that for a night in one of the treehouses (whichever ones are empty). We quickly figured out that one of the trails on the property desperately needed some work, and we immediately requested that project.

Breakfast and dinner are cooked for us by the “chicas”, and usually include rice, beans, fruits, and veggies, and sometimes meat or fish. They make some amazingly tasty things. I especially like fried plantains. We always have fresh fruit juice and amazingly good coffee. I don’t normally drink coffee, but maybe my habit will start here. My only complaint is that they really like to use cilantro here, and I absolutely hate cilantro.

Most tree houses are individually owned, and a few people are actually resident here full or part time. One of these people is Peter, an entomologist professor and National Geographic photographer, who on one of our first nights here, offered a night hike. We were quick to jump at the opportunity to join.

The hike was an amazing experience – Peter was a veritable encyclopedia of knowledge, showing us toads, frogs, gigantic insects and even an adorable salamander.

During the hike, a large skinny black flying insect became attracted to our headlamps, and I jumped back in fright.

“Yeah, just don’t let it sting you.” He replied.

“Don’t LET IT sting me!?” I was starting to panic slightly…

“Yeah, if it does, it really hurts.” He continued, calmly.

“I didn’t need to know that!” I yelled, running in the opposite direction.

“Yes, you do! It’s so painful, some people even faint. You need to know so you don’t let it sting you.”

I was already far from the group with my headlamp off at this point, completely terrified. What the hell was I doing here!? I don’t belong in the jungle where everything stings or could kill you. 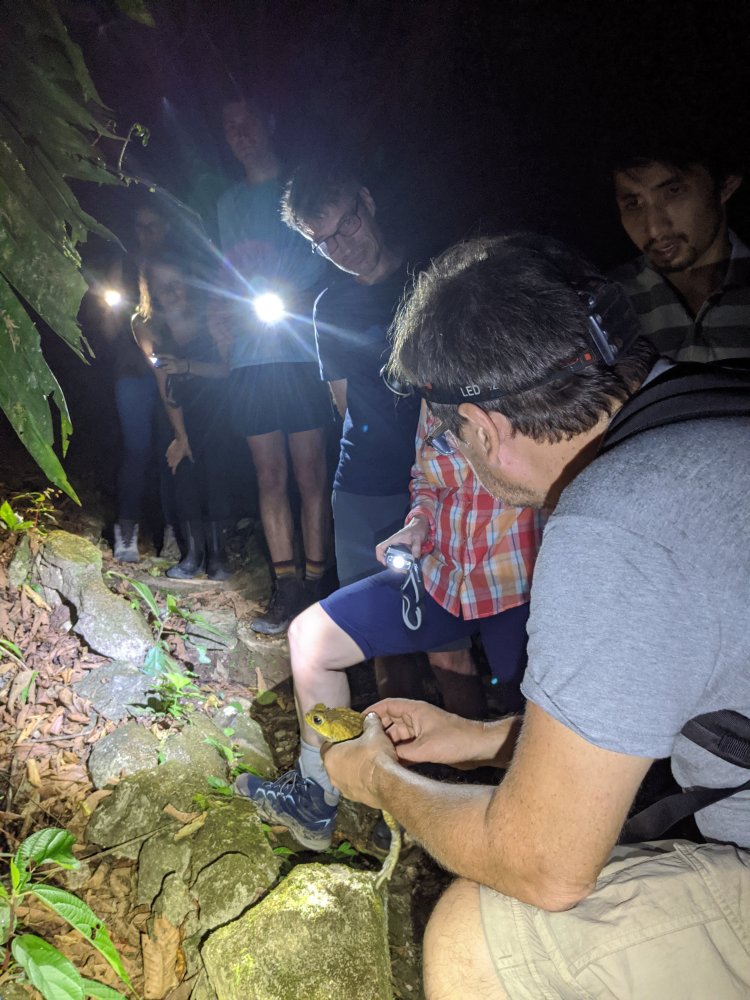 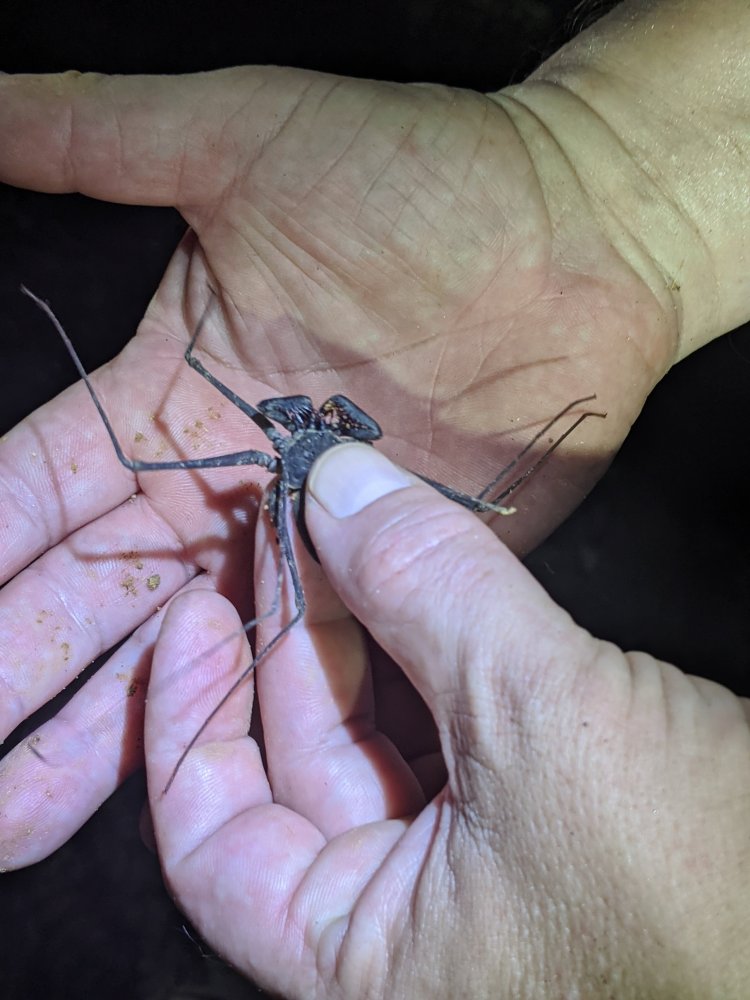 I’m just going to assume that everything is out to kill me, although that leaves me wandering through the jungle terrified all the time, since I’ve never seen such abundance of life. I don’t seem to be quite as terrified as some of the other volunteers, so I must be doing ok.

After a day or two of acclimating, I attempted to go for a run down the road to keep my running legs in shape. As I ran down the 1000ft descent down to the main road, I realized that it was getting hotter and hotter as I went. By the time I got to the main road, just 2 miles down, I was soaking wet with sweat. I attempted to run on the flat road for just half a mile, but I was simply too hot and dizzy. I had water with me, but it didn’t seem to help. I woggled back to the gravel road to hike back up, but I felt like crap. There was almost no shade, and the road just kept going up, and I was dying. I kept drinking water and stopping in any tiny bit of shade I could. If this wasn’t heat exhaustion, I don’t know what is. Luckily, half way up the road, it got a little more shady, and the breeze picked up just a little bit, and I started to feel slightly better. Sweat was literally dripping from the bottom of my shorts, and there wasn’t a single bit of me or my clothing that was dry.

When I got back to the bunkhouse, I jumped into the freezing cold shower and cooled off. Next time I need to try to get out first thing in the morning before the sun is so intense. 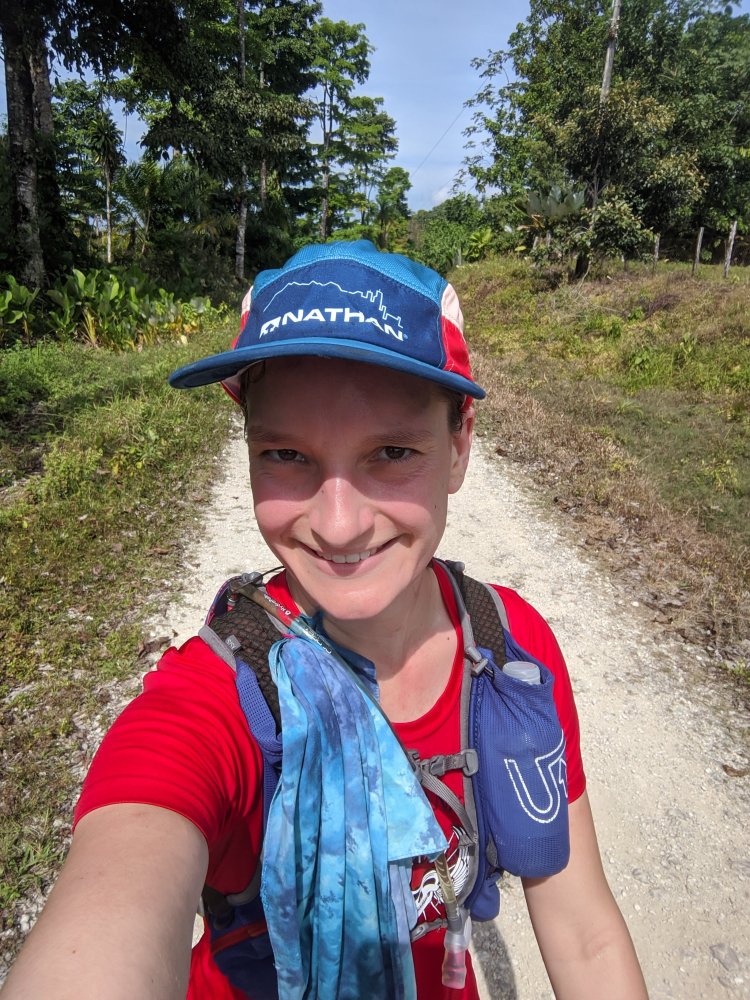 3 thoughts on “Arriving in Costa Rica”