Before heading out on this 19 mile loop, we were advised that ice axes and maybe even crampons would be necessary for Paintbrush Divide, which is a high elevation pass that allows you to travel from Paintbrush Canyon over to Cascade Canyon.

Since we failed to pack this gear, we asked John’s mother if she could kindly send it to us in the mail, since we left those items behind. I’m sure this isn’t kind of phone calls most mothers are used to getting, but within a few days she had found an appropriate sized box and posted the items in the mail.

The morning of our hike, we got a fairly late start. I was a bit nervous about how long these 19 miles would take, but I was also glad to have been able to sleep in slightly for a change.

We got to the String Lake parking area and got moving up Paintbrush Canyon.

As we climbed, the miles went by faster than I had anticipated. We weren’t the only ones out, we kept leap frogging another girl who was hiking solo up the canyon. As we approached Holly Lake, got chatting and found out that her name was Erin, and she was a traveling nurse with some time off between jobs.

We crossed paths with a backcountry ranger, and asked him what the divide was like, and he told us there were a few “tricky moves” near the top. We wondered what that meant, but he told us we probably wouldn’t need our ice axes. I was glad to have mine anyway just in case.

Erin had no ice axe or crampons, and had also been told beforehand that she probably wouldn’t be able to make it to the pass without that gear, but decided she would just go as far as she could and turn back.

I told her if it made her feel more comfortable, we could walk in front of her, and make sure there were good footsteps in the snow, and she could always turn around when she felt uncomfortable.

As we climbed, there were patches of snow, but nothing like what I had expected. This was obviously a well traveled trail since each time the trail passed through a patch of snow, there were well defined, easy to follow footprints which made it absolutely unnecessary to wear crampons or take out the ice axe.

We had almost made it to the top when Erin said something along the lines of “we made it!” But, she spoke too soon. Right before the top of the divide was a very sketchy spot where there was a patch of snow that was practically vertical and there were rocks all around it, also practically vertical. Most of the rock was loose rock to make things more interesting. 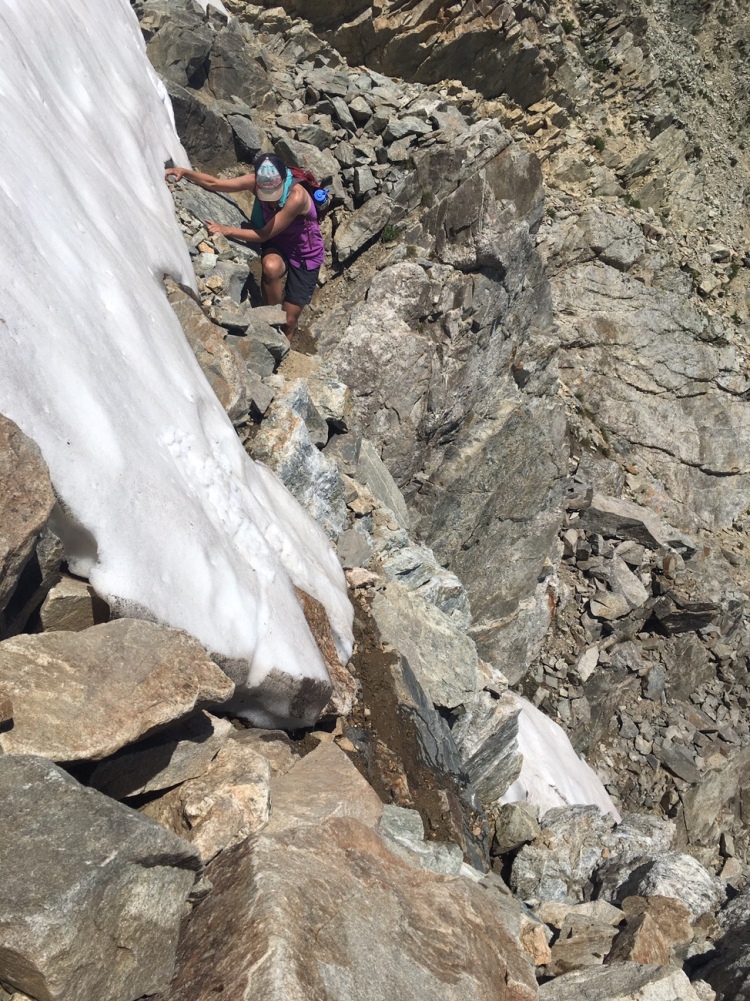 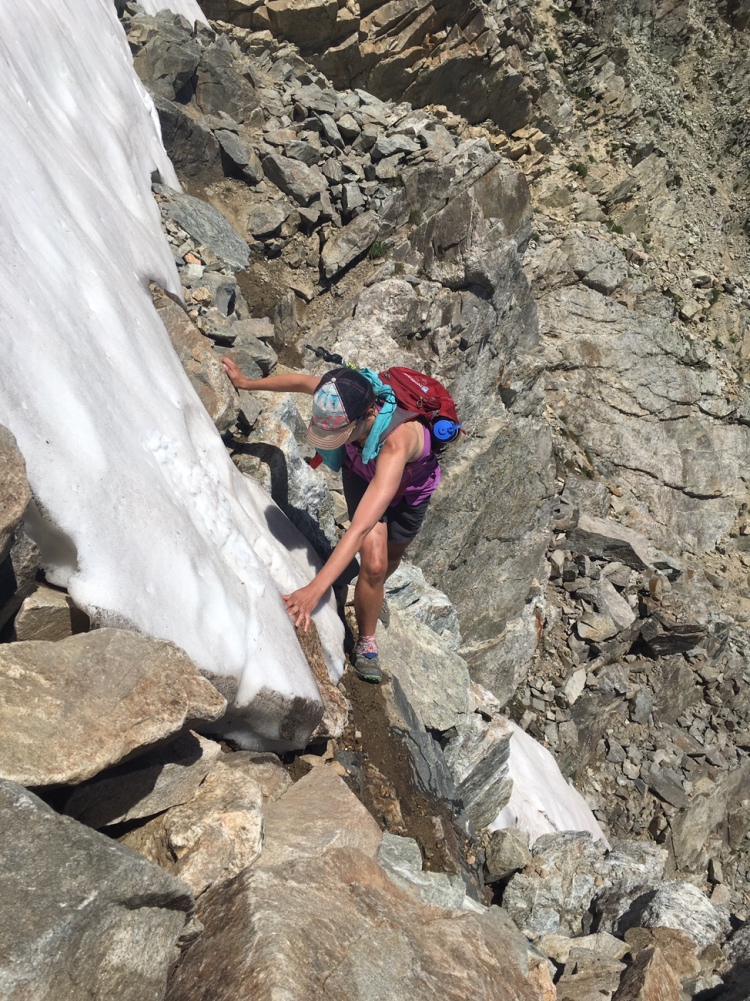 John went first, scrambling across a few small but very sketchy crevasses where a wrong step on a loose rock could send you tumbling many feet down. Based on how nervous he was, I almost figured I wouldn’t be able to make it across, but with a whole lot of courage and knowing that if I were to freeze up at any point, I’d be done for, I made a butt slide followed by a few steps that were way too large for my comfort and way too unstable for my comfort. But I made it. Behind me, Erin took her turn, and I was very surprised by how easy she made it look. She had about 3 inches on me, and she must have been made of pure courage. She admitted that she wouldn’t have done that alone and thanked us for our company. We were thankful for hers as well.

We reached the divide and were on top of the world with stunning snow covered peaks in all directions. A few people were milling around up there, and we traded notes on the sketchiness of the climb we had just done.

From here, the decent into Cascade Canyon was a piece of cake, and absolutely covered in beautiful wildflowers. Our progress was slow since every few feet, one of us felt inclined to take a picture. 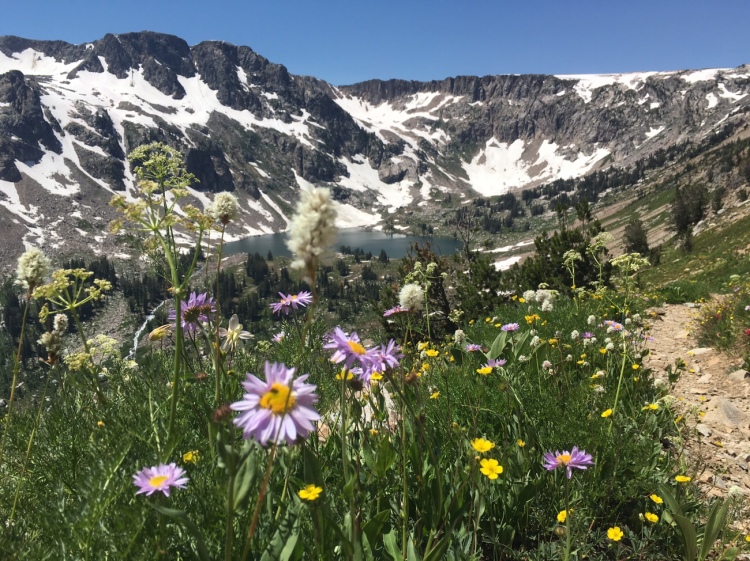 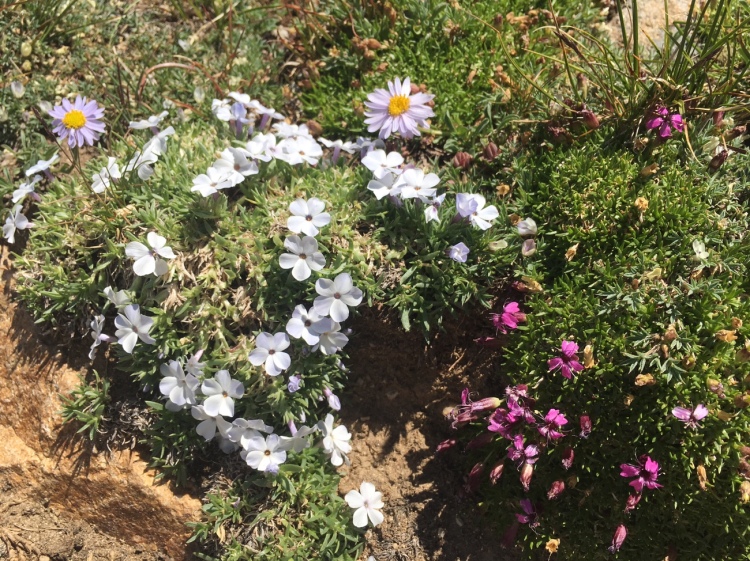 Just a short distance down, we hit Lake Solitude, which, ironically was the most crowded spot we had been all day. There were dozens of people sunbathing, picnicking, and even a volunteer ranger talking to folks. I couldn’t believe we saw a second park employee on the same trail. 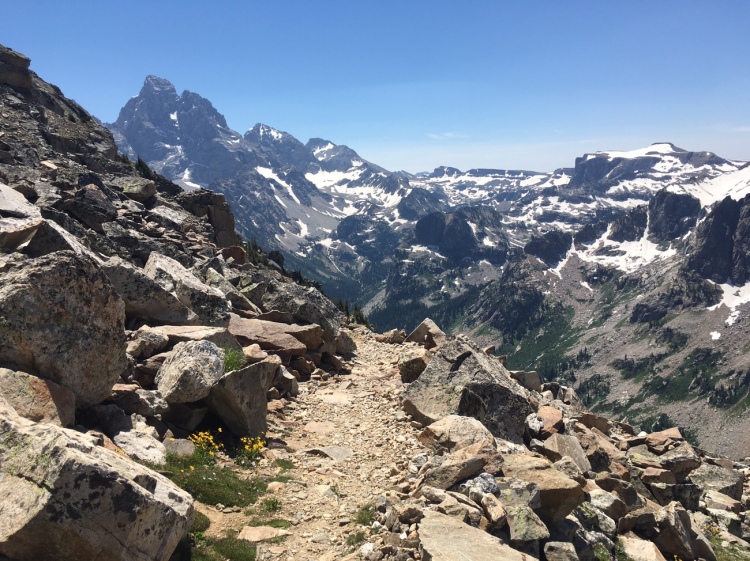 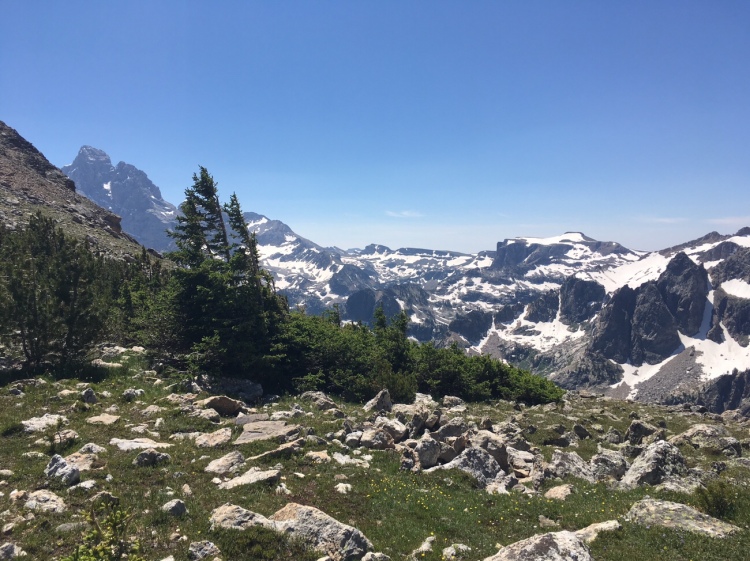 While we joined the crowds to stop for a snack, John decided to take the opportunity to jump into the lake, letting out a quick yelp at the frigidness of the glacial lake. He plunged in a few more times just to make sure. 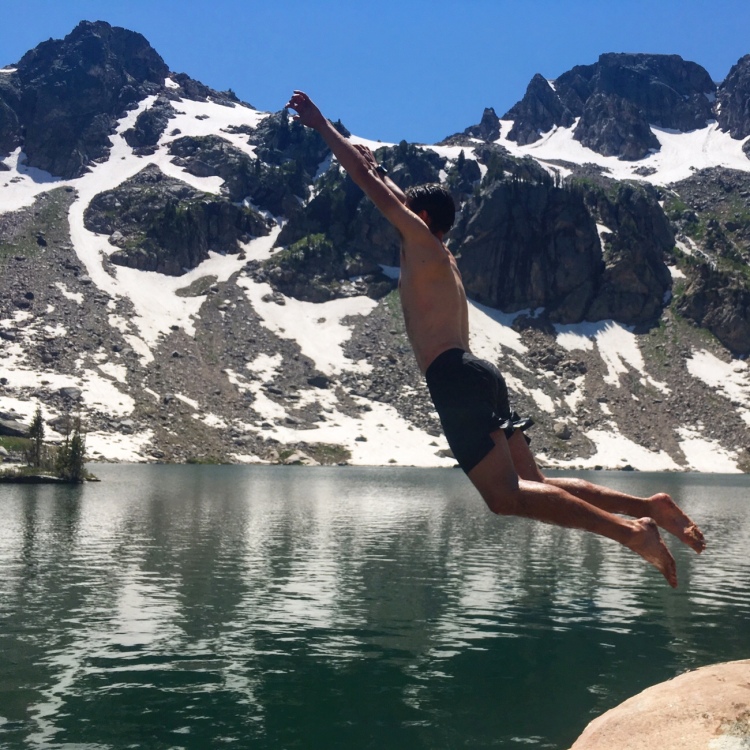 We traveled down the canyon with ease. Grand Teton loomed over us majestically and various flowers lined the sides of the trail. We often followed a stream which cascaded down the canyon, presumably giving its name, Cascade Canyon.

The number of people on this trail was astounding. We were right behind a big group and right in front of another group, but if we stopped, it seemed like another group would quickly catch up. There was no solitude to be found here. We swatted at horse flies, which seem to be ever present as the mosquitoes are slowly dying off, and the temperature slowly creeped up as we descended.

We quickened our pace as we got closer to the parking lot, and the miles seemed to drag on a bit as our legs started to fatigue. But, the trail continued in ease, and soon we were crossing the bridge back to the String Lake parking lot before trading information with our new friend and heading our separate ways.