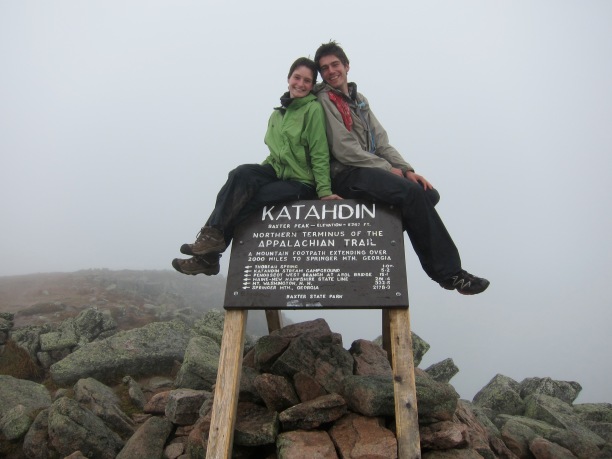 Dormouse (L) and Dirt Stew (R) at the end of their first Long Distance hike, the Appalachian Trail

A blog about two hikers: Dormouse and Dirt Stew

Where are we now?

We are currently residing in Asheville, NC and working mostly from home.  In March, Christine ran her first 50K, and John placed 3rd overall in the Cold Mountain 50k/25k.

Some of what we’ve done:

Click here to read some articles that we’ve been featured in or have written for other organizations.

A little more about us:

Dormouse and Dirt Stew met in 2008 at a juggling festival at Rochester Institute of Technology.  Dormouse had been planning since high school to hike the Appalachian Trail and was hesitant to start a relationship with a handsome sweet juggler, who would certainly break her heart when it was time to leave.  But after Dormouse laid the cards on the table, Dirt Stew without hesitation agreed to hike the Appalachian Trail with her.  This begins the love story between Dormouse, Dirt Stew, and long distance backpacking.

Dormouse grew up in Charlottesville, VA and went to school for Chemical Engineering at Bucknell.  She likes to hike, juggle, scuba dive and travel to awesome places that let her do more of those things.

Dirt Stew grew up in Merrick, NY and went to school for Environmental and Forest Biology at State University of New York College of Environmental Science and Forestry at Syracuse University.  He likes to hike, juggle, play Ultimate Frisbee, and travel places that allow him to learn about the natural world.

After we hiked the Appalachian Trail together in 2010, we moved from the East Coast to the San Francisco Bay Area, where we lived for a few years.  During that time we learned a lot about California’s wild lands from our friends at San Bruno Mountain Watch. Shortly after the Appalachian Trail and moving to California, we knew we wanted to hike the Pacific Crest Trail as well.  We were infected with the hiking-bug!  We were married in 2012, and after Dirt Stew’s father passed away in 2013, we realized that life is short, and decided the time to hike was not later, but NOW.  We started preparing for a 2014 hike of the PCT.  After completing our hike of the Pacific Crest Trail, we decided to move back east to be closer to family.  We continue to hike both short and long trails.  We now live in Asheville, North Carolina where we enjoy adventuring in the Blue Ridge Mountains.

During our 2014 hike of the PCT, Dormouse had severe hip pain, which did not go away after the hike.  She soon found out that she was born with Hip Dysplasia, a condition where the hip sockets are too shallow.  In 2015 and 2016 Dormouse went through extensive hip surgeries called “PAO” (periacetabular osteotomy), and in 2017 she finally had the last hardware (screws) removed in order to be a fully functional once again.  You can read about her recovery from the second PAO surgery in Dormouse’s other blog:  Screwed up hips

In winter of 2014 we moved to Asheville NC, and started working for Blue Ridge Hiking Company as hiking guides.  In 2018 we left to hike in New Zealand for 4 months, and then got an awesome job working for Leave No Trace Center for Outdoor Ethics working in Yosemite, Grand Teton and Denali before spending the fall traveling and hiking around Europe on a shoe-string budget.

We’d love to hear from you, either your questions and comments or simply your words of encouragement as we go along!